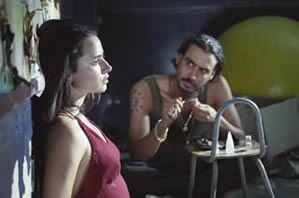 Were you to exit Secuestro Express five minutes in, you’d be forgiven for dismissing it as Lock Stock’s impoverished South American cousin. Grainy DV longs shots diverge with flashy character introductions, with Secuestro’s downtrodden scum introduced by baseball card profiles. But the simple premise, the overnight ordeal of an upper class couple kidnapped by three thugs, is more 24 than Guy Ritchie, a pseudo real-time documentary shot at claustrophobic proximity. You can almost smell the victim’s sweat.

Filmed predominantly with non-stars (local rappers with only several weeks training) Jonathon Jakobowitz maintains a naturalistic ruthlessness throughout. Secuestro is not an easy film to watch, but it’s good at what it does, with a level of slow sinking thoughtfulness that won’t register until long after the nauseating final scene. The closest Secuestro has to a protagonist, Alias star Mia Maestro – excluding a bit part by Ruben Blades, the film’s only familiar face – is believable in her intelligent cool. With an abduction occurring in Latin America every six minutes, from 70% of which the victims do not survive, the gradual dissolution of that defensive calmness as the couple realise their eventual fate is unbearable to the point of sickening.

Jakobowitz’s direction occasionally slips, abandoning its close, moist confines for the neon lights of Venezuelan MTV, but remains uncompromising throughout. Struggling to raise sympathy from his trio of murderous psychopaths, Jakobowitz occasionally smothers the films understated sensibilities with moments of gangster idolisation that will leave viewers confused by his intentions. The frequent comedic touches are jarring rather than alleviating.

Provokingly barbaric, Secuestro Express questions the intentions of both kidnappers and kidnapped with stomach-churning verisimilitude, even if end result is a little befuddled.