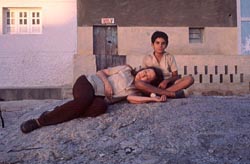 Former teacher Dora (Montenegro) writes letters for illiterate customers in Rio de Janeiro’s Central Station, and derives great pleasure from not sending them. When a mother is killed in a road accident outside the station, Dora sells her abandoned son Josué (Oliveira) to a disreputable orphanage where his organs will be harvested, using the money to buy a colour television. But soon conflicted by guilt, she rescues the boy, and they begin an arduous road journey to find his father. Central Station is a charming, though often depressing, road movie that makes fresh of its intimate, if familiar, premise. Walter Salles (The Motorcycle Diaries) keeps the relationship between ex-teacher Dora and Josué at a distance, educational rather than maternal. The initially callous Dora’s warming to Josué and subsequent restoration of her humanity is formulaic, but the terrific performances and sweet tone throughout make Central Station delightful from beginning to end.

Fernanda Montenegro, a popular television star in her native country, plays a despicable wrench initially devoid of redeeming features, her features sagging under the weight of a lifetime of ill will. Vinicius de Oliveira is excellent as Josué, a boy forced to instantly mature when his mother is run over. Before his role here Vinicius was a shoe shiner, the money made from Central Station allowing him to afford an education, and there is an authenticity about his abated desperation.

The characters this odd couple meet along the way are memorable without ever falling into the category of caricature, and as Dora begins her inevitable redemption there’s a fairytale optimism illuminating their foredoomed passage. Remarkably similar to Takeshi Kitano’s droll Kikujiro, released the same year, South Central is lighter than much of Brazil’s recent output without being saccharine.