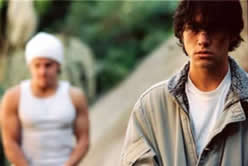 Much like Napoleon Dynamite, Brick exists within its own cinematic reality. A hardboiled high school community, where each individual fits into a plot-specific archetype and speaks in a tongue recognisable yet foreign, it’s a laboured, consciously constructed universe, comprised from pieces of other, simpler movies.

Brick gets more points for effort than finished product. Director Rian Johnson has an apparent understanding of the noir genre, with frequent reference to Dashiell Hammett, The Maltese Falcon especially, but the film lacks the gross comic-book caricatures and dry, coy dialogue of Hammett or Chandler. Drug baron The Pin (a disappointing Lukas Haas), violent henchman Tug and informant The Brain fall into the unfortunate category of uninspired stereotypes rather the intended slants on well-worn archetypes.

Favourably compared to Donny Darko, Brick’s merging of two disparate genres is somewhat blunted by its undeserved hype. Yes, it’s a clever film, crafted by a director that knows his movies. But unlike Tarentino or Richard Kelly, Brick’s transparent novelty and awkward hardboiled teen jargon does little to hide a superficial plot containing few twists or turns. Johnson’s incessant efforts to defy genre all fall flat.

Joseph Gorden-Levitt (10 Things I hate about You) plays the moody Frye admirably, but his downtrodden sleuth Frye has little in the way of back-story, well-worn wisdom or infallibility that made Philip Marlowe, Sam Spade et al. so intriguing. Lost’s Emilie de Raven also does her part, but the rest of the cast, an ensemble drafted from the teen movies of yesteryear, are all a bit Bugsy Malone.

An interesting, if not entirely satisfying, film that’s ultimately too clever for its own good, Brick is easy to appreciate, but difficult to enjoy.