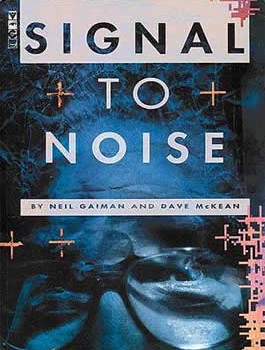 Signal to Noise has one of those rare concepts every aspiring writer wishes they’d come up with first. A film director, diagnosed with cancer, has only a few weeks to live. Tormented by the fact that a long standing personal project he’s longed to make, his unproduced magnum opus, will never see celluloid, he decides to spend his final days directing the film in his head. Faces in the street become his actors, troubles in his private life his guiding inspiration. Signal’s plot is almost entirely contained within the anonymous director’s cerebrum, the last thoughts of a dying man as he fights to finish a work more important than himself. That the film in question is about a European village as the last year of AD999 approaches, prophesied as the end of the world to these people, mirrors his own approaching Armageddon. Cheerful stuff, then.

Less graphic novel than fluent, visual poetry, McKean’s trademark fusion of photorealistic art, idiosyncratic, handcrafted collages and abstract imagery is breathtakingly absorbing. An overuse of now archaic computer generated imagery occasionally robs the art of its intimacy, but this a common problem with all digital comic art of the early nineties. The two-page chapter dividers at first seem pretentious, but perhaps best embody the book’s titular noise, the static interference that infers with any creative mind.

Gaiman’s writing is somewhat thinly defined, though I suspect intentionally so. The film director is nameless, disconnected from the real world but for one close friend. As our ill-fated creator, and consequently his creations, reach their conclusion, Gaiman manages to hit an endnote so bittersweet and poignant that our relatively short, simple journey feels epic in retrospect.

Enigmatic and meaningless at the same time, Signal to Noise is likely to baffle as many as it inspires, but it’s an effectual, modestly complex work. The recent rumors of a film adaptation are a little dubious; it’s an unfilmable book, vague and ambitious despite its modest execution.

Gaiman’s style is, as ever, more emotional than cerebral, managing to avoid the academically philosophical pitfalls a lesser writer would rely on. Maybe that’s the only way to describe Signal’s narrative, as an emotion rather than a story, one tragic, desperate final moment.