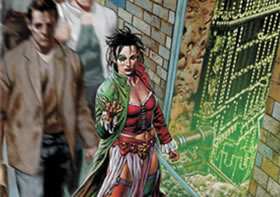 There’s something foreboding about any book which gives front cover prominence to author over title. It’s a tell-tale sign that a writer has reached a stage wherein his name bears more weight than the quality of his/her material. It’s even less reassuring when said writer has had little input onto the work that bears his name.

Lucifer’s Mike Carey does a faultless job of a thankless task, adapting the original novel’s third-person prose into a first person narrative as awkward and perplexed as its bewildered protagonist. Gaiman’s inspired dialogue occasionally hits the high notes of pretentiousness, but the entire thing moves by at such a pace that it really doesn’t matter. Neverwhere is a floating market of ideas. Some work, others don’t; there’s rarely enough time to notice. Neverwhere’s abstract plot is relatively pedestrian, following the adventures of generic everyman Richard Mayhew, a browbeaten London office worker. When Richard stumbles across the unconscious body of the attractive, pallid Door, he is sucked into London Below, a postmodernist’s wet dream, a world under, above and between our London.

Neverwhere has a plot that is best enjoyed rather than explained, making sense only in the sense that it doesn’t. Those inclined to question their fiction may find the journey a little arduous.

With names like the Angel Islington and The Marquis de Carabas, London Below’s inhabitants are amalgamated from the usual Gaiman influences; mythology, folklore, religion, the Commedia dell’Arte, and the obligatory cute Goth chick, his premium entities are villains Mr Croup and Mr Vandemar, a little/large combo of softly spoken assassins that feel like they’ve been banished from a dark, depraved Dickens. Raucously malevolent, the anticipation between their increasingly gruesome misdemeanours gives Mayhew’s passage through London Below a much needed state of urgency.

Glenn Fabry’s art should be prescribed as a nutritional supplement for the eyes, with several establishing panels that you could get happily lost in for several days. His facial expressions are almost on par with Dillon’s work on Preacher, conveying a charismatic empathy that the original TV version’s wooden actors never could.

Neverwhere isn’t an essential read, lacking the focus which established The Sandman and The Books of Magic classic status. It’s a forgettable but enjoyable read, never short on imagination but lacking any depth or lasting meaning. Though perhaps more importantly, it’s a successful novel to comic adaptation, losing nothing in translation. And those are a rarity indeed.