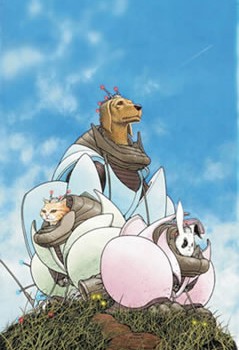 I’ve always considered Grant Morrison the Philip K. Dick of the comic medium. But writers both are inhumanly creative, incomparable to almost any other writer of their period. Like Dick, Morrison writes to pay the bills, churning out radically inconsistent work with unnerving regularity; and like the majority of Dick’s books, Morrison’s work often collapses under a multitude of whimsical ideas. But when Morrison hits the target, like Philip K. Dick he’s the best of his kind. We3 follows the fortuitous escape and arduous journey of lab experiments 1, 2 and 3 (dog, cat and rabbit respectively). The animals – referred to as biorgs – developed for covert missions and political assignations, are packed with enough firepower to cripple an entire army. When the project is decommissioned, the animals are to be put to sleep, but are freed – perhaps imprudently – by their compassionate creator Roseanne Berry.

We3 has been compared to The Incredible journey, but its themes of animal cruelty for its own sake are far closer to Richard Adam’s The Plague Dogs. Like Adam’s novel, the story is seen from both animal and human perspectives. The series’ original covers, a series of “missing pet” posters add another dimension to the fable, displayed by Bandit’s desire to be a “gud dog”; these animals were all once someone’s friend.

The implementation of a mastiff prototype as the fugitive’s primary threat seems a little contradictory, though to his credit Morrison does not resort to sentimentality as a lesser writer might. The feline, 2, kills with an almost sadistic glee, and many human lives are inadvertently taken by the sentient weapons as they traverse forest and city. Yet we still sympathise with the beasts; they are as much victims as those unfortunate enough to cross their paths.

Quitely’s art has been billed as a kinetic, “western manga.” Given the substandard nature of the majority of Japanese comics, that’s an insult. His panel composition is among the best there has ever been, showcased perfectly in an almost dialogue-free first part. Several pages feature intricate layouts of several dozen tiny panels, lending WE3’s commotion a remarkably dense pace; it definitely feels a lot longer than 3 issues.

Quite how the low-key ending manages to hit the heart with so few words is a mystery only the greatest science fiction writers could possibly answer. We3 may not be Morrison’s most creative or ambitious work, or indeed his most intelligent, but it’s perhaps his most effective.

One thought on “WE3 Graphic Novel Review”