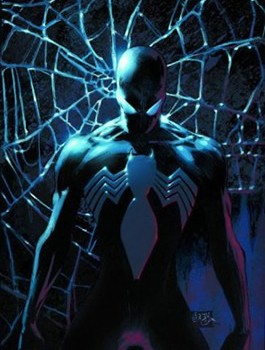 As a bullet riddled Aunt May lies in critical condition – okay, so there was only one bullet; a little hyperbole never hurt anyone – Peter Parker gets introspective, in this flashback themed collection which focuses on his relationship with the symbiotic suit, Eddie Brock and Venom. With the controversial retcon that is One More Day approaching, Back in Black does not present a particularly strong good case for why Spider-man should remains as is. Webbed up in his past, the character is definitely in need of a fresh start. The reasons for Spidey’s return to black, other than a ephemeral boost in comic sales, are never clear; he appears to have ceased all Aunt May-related revenge intentions.

First we have the Robert Louis Stevenson tinted ‘The Strange case of…’ in which B-list villain Mr Hyde is attempting to recreate a Spider-man of his own. It’s the typical of the unimaginative, insincere plotting that has dragged the Spidey titles down since Straczynski’s departure. Next up is the ‘The Last Temptation of Eddie Brock,’ by far the best of this lot, in which a terminally ill Brock plots to rid the world of its greatest evil – that’s right, Aunt May. Since selling the symbiote to Mac Gargan (the Scorpion) Brock has become suitably pathetic, though not nearly as sympathetic as writer Roberto Aguirre-Sacasa wishes him to be.

‘The Book of Peter’ and ‘To Have and to Hold’ both dwell on Peter and Mary Jane’s doomed marriage, but neither disclose anything other than the fact that they are both in love. Clayton Crain’s art merits a mention as it is phenomenal, best described as a digital Alex Ross with far superior panel composition. He’s been doing the rounds for several years now, but his art has never looked this slick and distinct. ‘Homesick’ and ‘ Undone’ are completely retrospective stories, which would be fine were they to reveal even minor revelations about the characters concerned. But alas, no.

There is a multitude of talent involved here, and it’s clear that the burgeoning creative teams that appear to be working on these titles, in order to adhere to schedule I assume, are preventing a series such as Sensational Spider-man from maintaining any consistency.

It feels a little asinine to criticise a graphic novel for the way its content mingles. It shouldn’t. For this book Marvel has clearly thrown every bit of extraneous fluff that did not have a home elsewhere, and thrown it together in the hope that it will stick. It doesn’t. And the end result is a contradictory mish-mash of generic fillers with essential plot happenings; the Spider-man Family adventures, which will indeed only appeal to the youngest readers, huddle under the same spine as ‘Marvel Spotlight: Spider-man’, a “behind the scenes” series of interviews and retrospectives that are directed at the aficionado. To pad this obese collection out further is the ‘Back in Black Handbook’, which, contrary to titular suggestion, details far more than those featuring in this story arc. Again, it’s an inclusion that will only be of interest to the serious collector who will have presumably bought the original edition.