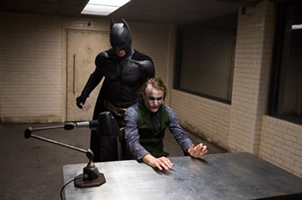 Outside of the animated feature Mask of the Phantasm, Batman has never really received the cinematic treatment he deserves. Despite a large canvass for intelligent, creative storytelling in the comic medium, the world’s foremost rodent-themed detective has never been given the thought provoking movie adaptation that comic writers such as Frank Miller, Grant Morrison and Jeph Loeb have provided again and again. Even Nolan’s excellent Batman Begins began to creak once the origin story had been dealt with. I can’t help but find it amusing than in a year of little CGI robots, big CGI Hulks and billionaires in CGI flying suits, audiences would rather see a knife-wielding psychopath in greasepaint. Let’s put Heath Ledger’s untimely death and the post-humus Oscar debacle aside; the Joker dominates Nolan’s twisted plot from the very first scene – a meticulously orchestrated bank robbery with a dark sense of humour that would not feel out of place in a Coen brothers piece. A malevolent force of destruction devoid of reason or redemption, Joker’s ostensibly chaotic masterplan pushes Batman further than ever before, forcing impossible decisions upon him in the hoper that he will accept the futility of his fight.

Despite Bruce Wayne’s technology, and the fact that financially he has Gotham at his disposal, he can neither comprehend nor predict the Joker’s unhinged game theory. More importantly, he cannot bring himself to kill him. It’s this theme that carries The Dark Knight, adding gravitas to the impeccably paced cat and mouse charade, enhanced to no end by Han Zimmer’s exhilarating yet elegant score, which at times intensifies to spine tingling levels. Though there are several big buck car chases, the Nolans and screenwriter David Goyer should be applauded for constructing a three man face-off which satisfies every requisite of the summer blockbuster without compromising the plot’s personal level.

The Dark Knight has drawn multitudinous comparisons to The Godfather II, yet in many ways it is better compared to the first Godfather. Whereas that film took a pulp genre often associated with square-jawed dicks and moronic goons and gave it depth and heart, The Dark Knight has taken not only Batman, but superhero movies in general, up a notch. Christopher Nolan’s ambitions often yield convoluted and arguably pretentious results, but he is a filmmaker of the utmost integrity and, more importantly, taste. Not once does he shatter our suspension of disbelief or, as is often the case with superhero movies, abuse the high budget allocated him.

As with almost every other critique of this film, I have only praised Ledger’s performance. And it’s a shame that Bale, Oldman, Caine and Eckhart have been overshadowed by the late actor, as they all perform exceptionally. Aaron Eckhart plays Harvey Dent/Two-Face, the tortured variety of villain we are so accustomed to with absolute sincerity, though his character’s descent into dualistic madness is unfortunately overshadowed by the clown. Gary Oldman has a far more prominent role this time round, his character sitting somewhere in the middle of the three extremes. Maggie Gwyllenhal, taking over from Katie Holmes, plays the again underwritten Rachel Dawes, who seems to have survived a second movie simply to tick the obligatory love interest box.

But this is a negligible whinge; it is almost impossible to think of one element that could have been pulled form The Dark Knight without the entire film collapsing. Impeccably paced and immaculately conceived, The Dark Knight is the antithesis of the summer blockbuster. It may occasionally teeter on pompousness, but this is intelligent, sophisticated and poignant entertainment… with a frequently ingenious violent streak.