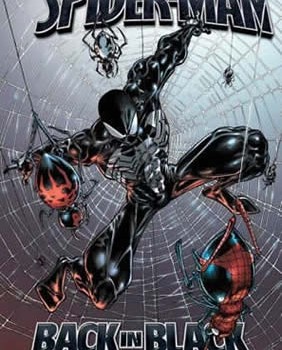 Spider-man has been yanked in some questionable directions over the last few years, which is why Back in Black, a refreshingly simple revenge tale, has the potential to work so well. With Aunt May left comatose from the bullet that was intended for Parker, the webslinger has been pushed into a compromising position, with his code of conduct preventing the level of retribution his emotions demand. Of course, we all know that, despite Peter Parker’s darker direction – he’s even dusted off the black costume to show how serious he is – he will never resort to murder. It’d be as preposterously uncharacteristic as Iron Man leading some anti-superpowers Nazi registration act. So the whole exercise is a little empty. Still, Parker’s eventual confrontation with the then incarcerated Kingpin, a villain usually more effective when pulling the strings from afar, is so tightly scripted that we can almost forget the two of them have been at it for decades now. Were it not for Straczynski’s writing in this scene alone, the entire Black in Black storyline would have been a waste of time; instead, J.M. presents us an emotionally charged battle that is epic despite its small scale, and will remain one of the finest moments for both characters.

With so many Spidey-titles circulating at the moment, Marvel seems content on cramming as many different, disparate plots into each trade paperback volume. And though not nearly as severely a case as with Back in Black volume 2, this book is far too inconsistent. Straczynski’s main plot, which has a more grounded, motion picture feel, is let down by Peter David’s effort in which Max Borne, the Spider-man of the future, pays contemporary New York a visit.

Peter David has often come under fire for his outlandish ideas, but I have always thought of him as a traditional comic book writer, as opposed to Straczynski, who is a far more modern, cinematic writer. David’s style worked incredibly well on his Hulk run, and his impeccable sense of humour – unlike Straczynski he is capable of writing genuinely hilarious Spidey dialogue – would have perhaps better suited the Friendly Neighbourhood Spider-man title were the Back in Black event so creatively restrictive. As with the Batman books, Spider-man has been stretched across far too many titles per month, and as with Batman it’s becoming painfully clear that the storytelling scope for the character is becoming increasingly narrow.

But maybe that’s all the Back in Black story arc is: 1. a plot device to get Spidey back in his monochromic 80s costume to belatedly coincide with the third movie, 2. a filler to make us wish for simpler times. The latter of which is exactly what Marvel promises with the accursed One More Day. Continuity be damned!