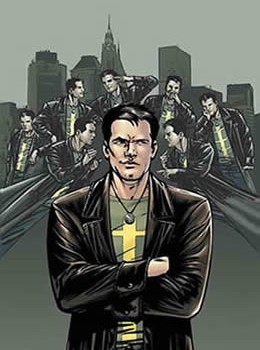 One question I’m frequently asked by friends who’ve been bitten by the comic book bug, typically via movie adaptations, is “what’s your favourite superhero?” Despite my best efforts to, firstly, explain that I generally choose the books I read on the creative talent involved and, secondly, explain who and what Cerberus the Aardvark is, the response to my answer is always met with bafflement. Surely my favourite comic book character/license would be Batman, Superman, Spider-man or the Hulk? But I guess I’ve always been a sucker for the underdog, in popularity and comic sales if not necessarily fictional status. Which is one reason why I for one preferred Peter David’s 90s run on X-Factor, and his quintet of B-listers far more than the original Cyclops led line-up. David’s X-Factor was the definitive also-ran roster – they were led by Cyclops’s wiener brother Havok, for crying out loud. What teenage geek couldn’t identify with that?

Jamie Madrox, the Multiple Man, was one such loser. Blessed with a bizarre but novel ability – he produces duplicates of himself when struck – he was the sort of irreverent character that would never receive a movie or cartoon series, but his exploits were usually far more appealing than a big green guy wrestling tanks for the hundredth time.

After fleshing Madrox out substantially in the aforementioned X-Factor run, Peter David returns with this miniseries, in which the Multiple Man has ditched the moniker and costume and “gone noir”, setting up business as a private detective. In a very postmodern fashion, David keeps reminding that this is noir-lite, even going as far as to have one goon provide us a definition. But in Multiple Choice David bestows us a nice twist on the genre – just a soon as he’s set up business, Madrox is investigating the murder of one of his own duplicates.

Unfortunately, such an intriguing premise goes to waste halfway through. David has always flaunted a natural talent for dialogue, and his portrayal of Madrox is always compelling, aided in no small part by Pablo Raimondi’s enjoyable art and the heavy inks of Drew Hennessy. The team does a great job of portraying Madrox as simultaneously smug yet vulnerable, egotistical yet altruistic; like all the best Chandleresque dicks, then.

Fellow X-Factor cohorts Rahne/Wolsfbane and Strong Guy turn up to lend a hand in an unnecessary subplot, in which Madrox’s first genuine client suspects her husband of out-of-body infidelity. But again, this interesting idea dawdles along to a rather underwhelming conclusion.

With a finale that remains partly unresolved, Multiple Choice is a pleasantly average effort that will hopefully go on to make a far better regular series. Peter David’s work is always readable; whether he is on autopilot here or just warming up is yet to be seen.