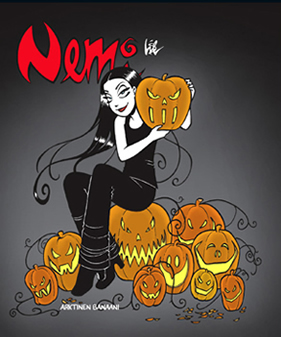 At first glance Lise Myrhe’s Norwegian comic icon Nemi Montoya appears to have been designed specifically for the licensing of T-Shirts, bags and whatever the kids of today are buying. UK readers may be familiar with the Nemi strip, or at least its English translation, from the Metro newspaper, though the Goth demographic will remember its former home in Terrorizer magazine, wherein Nemi was presented as the answer to Kerrang!’s smuttier, coarser but less amusing Pandora Peroxide Fortunately, both the strip and its monochromic protagonist have mellowed with widespread distribution, and the result is a far more amiable read. The obscure heavy metal references have been toned down, with Myrhe still stabbing at pop culture and the letdowns of twenty-something life. There an impressive diversity of humour in here too, from the clichéd (dating, dieting, drinking) to the irreverently literate (Lord of the Rings, Edgar Allan Poe, literary and junk culture references aplenty) and the bizarre (Nemi’s Legolas obsession bordering on disturbing).

But if there is one thing Nemi has, its heart, albeit a cold and presumably black one. The strip is often funny for its honesty and rarely trips itself up with pretensions to be anything deeper. Like Jim Davis’s feline creation Garfield (and to an even greater extent Jon Arbuckle) perhaps Nemi’s greatest appeal is her range of expressions and personal minutiae. Her expressions are often worth a dozen speech bubbles. Like Harvey Pekar’s self-facsimile curmudgeon, she’s a partial observer whose sardonic responses to the absurdity of everyday life will connect with any “individual” possessing half a conscience.

Creator Lise Myrhe clearly adores her creation as much as anyone else; a quaint, fourth wall breaking section at the book’s rear shows the two beside each other, as if to champion this autobiographical symbiosis between creator and creation as something novel. I’d like to see a cartoon strip or independent comic character that isn’t predominantly based on its author.

As with most cartoon strip collections, there’s no narrative arc running through this volume, which should make Nemi a harder read in several sittings than it would be in daily, bite size portions. But that would be missing the point. This second compilation of Myhre’s devilish Goth girl is perfect coffee table material – everyone who opens it up will find something to giggle at. Sure, you may have to be a social outcast to appreciate Nemi – but who else reads the funny books, anyway?