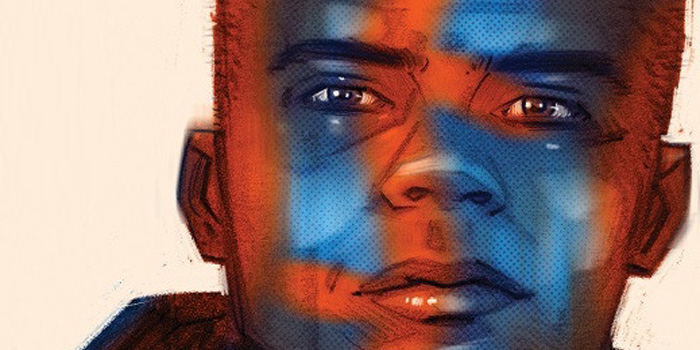 Christian Carnouche’s ambitious science fiction series merges several fascinating concepts to depict a near future in which death is now a curable ailment, courtesy of the sinister Drexler Nanotech Corporation. But this progress has come at a cost: just a few years prior, an explosion at a Drexler nanotechnology factory decimated 99% of Australia’s population.

Cain Duluth is policeman of Aboriginal descent whose wife and child died in that explosion. He’s relocated to Nova Lucis, a fictional New York island, to escape his past, but an investigation into the murder of a recently resurrected (or “rezzie”) leads Daluth and his partner Akimi Ozaki on a journey that will pit them against Drexler and an unexpected antagonist, and force him to confront his heritage.

Crizam Zamora and Salvatore Aiala bring a diverse cast of characters to life, bound by a strong allegory in the persecution of Aboriginal-Australians by the British Empire. 2037 Nova Lucis is equal parts tech paradise and eerily soulless dystopia. Zamora’s clean, crystalline cityscapes are a world away from the well-worn Blade Runner template, yet for all its progress The Resurrected’s future feels equally hopeless.

As is often the way with modern science fiction, The Resurrected occasionally feels as if it’s wrestling between delivering smart sci-fi or gratuitous action, though it finds a balance between the two far better than the Hollywood blockbusters from which I presume it draws much inspiration. Christian Carnouche’s script revels in the usual genre conventions while blending in some bold social-political commentary, Aboriginal mythology and enough fresh ideas to make for a gripping and unpredictable read.

This is a considered and intelligent sci-fi comic with a lot to say.

A successful Kickstarter for a physical TPB of the 5-issue series recently concluded, which will hopefully be released this October. Until then, you can find out more at carnoucheproductions.com, and read the digital issues on comiXology.