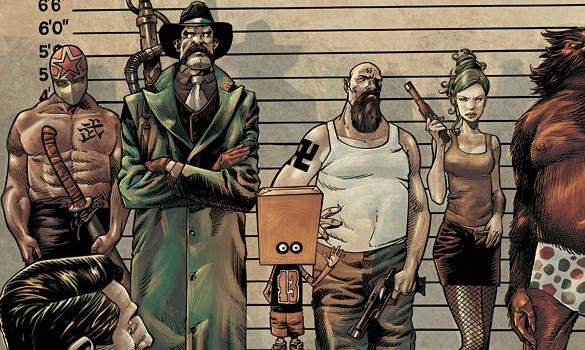 In an era of oversaturation that has seen countless quality comics disappear into the creative abyss, Todd, The Ugliest Kid on Earth seemingly appeared out of nowhere to a loyal following. The first issue of the series reportedly sold out in less than a day, presumably as a result of willingness on the part of the series’ publisher and creators to push digital copies to as many websites and journalists as humanly possible, and rely on positive press coverage and word of mouth. Funny how that works, eh?

Yup, it’s pretty fucked up stuff, and a series which have you questioning your ethics for having just read the damn thing. When Ken Kristensen’s writing is at its best, Todd is a delectably warped satire of American culture. At it’s the worst, the series feels like it’s continually scraping the bottom of the barrel of tasteless humour archetypes – and when the first issue attempt to wring laughter from child murder, that’s saying something.

Fortunately, the quixotic Todd provides the series some much-needed heart. M.K. Perker’s consistent art carries the book throughout; looking like the sort of children’s book an Arkham Asylum inmate would illustrate. Seriously, there isn’t single character in this series who isn’t repellently ugly. Apart from Todd, possibly, but I hope we never see under that makeshift mask.

Todd seems to have found a passionate readership – the series was originally conceived as a 4-part mini, and has now been picked up by Image as an ongoing series – and I realise that it probably isn’t for me. But I acknowledge that I’d be hard pressed to name another comic that is remotely like it.

Todd, The Ugliest Kid on Earth is perhaps the epitome of a cult comic, then. Much like the works of John Waters, Troma and Todd Solondz it’s going to offend a large portion of the people who read it, but those who appreciate Kristensen’s dark humour wont just like the series, they’ll love it.