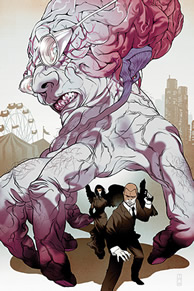 Creations of mad scientist Anton Arcane, the abominable Un-Men first appeared in the pages of Swamp Thing. They were later re-imagined in the early nineties mini American Freak, the events of which this new incarnation continues a further decade on. John Whalen’s contemporary interpretation of the Un-Men wisely reboots the concept while keeping a few familiar faces around. Readers not familiar with Swamp Thing or previous Un-Men titles will not feel left out of the loop. Like many Vertigo titles that sprouted from mainstream DC titles, it is unclear but unlikely that this book takes place in the regular DC Universe.

When “natural-born” performing freak ‘Bertoldt the Amazing Gill-Boy’ is found murdered, the U.S. Department of Energy, which has overseen the one-time H-bomb test site, sends Agent Kilcrop to the city Aberrance, refuge to a large proportion America’s freak population.

Like Bill Willingham’s first Fables story arc, Whalen uses the murder mystery genre form to introduce us to the inhabitants from Aberrance from an outside perspective. Like Fables, I can only see this series getting more interesting once the characters are established enough to carry the pot themselves.

Mike Hawthorne’s art has a rough edge that captures Aberrance’s warped mutations perfectly, and Whalen’s dialogue is snappy and suitably bizarre – the conjoined Janus Senior and Junior especially – but there is little beneath these characters’ gruesome exteriors. Agent Phineas Kilcrop, an otherwise ordinary albino, is a necessarily dry protagonist in a city of freaks, but he’s not an entirely empathetic character. Though vol. 1 does hint at Kilcrop’s secret past (what other kind is there?) there are too few breadcrumbs laid out to make us want to care.

‘Get Your Freak On!’ is an interesting enough read, but as with many “pilot” storylines it’s difficult to say if or how the series will pan out into something more intriguing.

One thought on “Un-Men vol. 1: Get your Freak On! TPB Review”