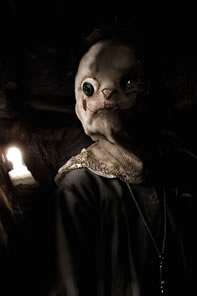 With The Devil’s Backbone and Pan’s Labyrinth Guillermo del Toro revitalised a horror subgenre long subsided to slasher pics and gore-porn attractions. Though he retreats to a producer position here, The Orphanage is a similar effort that will please fans of intelligent horror – an almost oxymoronic label given current horror trends. With physician husband Carlos and adopted son Simón, Laura Jenkins (Belén Rueda) returns to the orphanage where she had lived as a child, with plans of reopening it as a home for sick and disabled children. When Simón, who is HIV-positive, and unaware of either his adoption or his illness, disappears, Laura begins to suspect that his imaginary friend Tomás may not have been entirely fictitious.

So heavily flaunted in the film’s marketing material, The Orphanage’s fantastic visual trump; the apparition of a child in a deformed scarecrow mask, is sparingly but masterfully used. Like Robert Wise’s 1963 chiller The Haunting, this film gets its scares via ambience and audio effects rather than CGI trickery.

It seems a little unfair that Juan Antonio Bayona’s work on The Orphanage has been unable to escape comparisons to del Toro’s superior efforts. Bayona’s direction does not feel as textual, and evocative of its time as Toro’s, and he compromises the otherwise minimalist chills with a graphic car accident. As a first-time feature length effort, however, it’s an exceptionally crafted tale. A redundant closing scene aside, this is a deliberate, cerebral horror that will linger uncomfortably in the mind long after it’s finished.

As with the Victorian ghost stories that these films provoke, the ghosts are not necessarily an antagonistic threat. Unlike The Devil’s Backbone, however, The Orphanage does not force a human villain unto us; Laura’s plight to find her son culminates in a tragic revelation that despite its resonance will probably disappoint cinema audiences weaned on knife-wielding maniacs and crimson-splattered finales. For the minority that require something more from their scares, The Orphanage is an absolute treat; the most atmospheric, thoughtful horror since The Others.