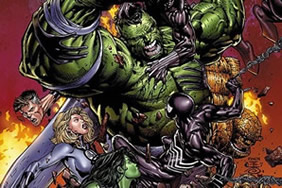 After the sword & sandal fantasy departure Planet Hulk, World War Hulk feels long overdue. Given the recent conflicted nature of Earths Mightiest Heroes, the Hulk is, comparatively, one of the few Marvel characters with his head screwed on… and he’s hell-bent on flattening Manhattan and converting it into a gigantic coliseum. That’s about as rational as World War Hulk gets. As Hulk returns from the planet Sakaar, which he believes was destroyed by the Illuminati (Iron Man, Reed Richards, Doctor Strange and Blackbolt) he vows only to enact his vengeance on the quartet responsible for his exile. Buildings topple, cities burn, aircraft explodes, yet in a bizarre logic exclusive to the Marvel Universe, we are to believe that not one soul falls victim to New York’s ruin.

A prologue clarifies both parties’ reasons for entering this conflict, but only further emphasises how skewed Marvel’s popular characters have been since Civil War, with every hero obliged to take a side for the sake of narrative convenience.

Greg Pak is extremely adept at writing this kind of big event, as he confidently jettisons dialogue and character development for inventive action-driven scenarios. If this book has anything going for it, and it does, its direct, no-nonsense storytelling, with a pace that does not give up. Though the end result is obviously a little hollow, World War Hulk was never going to be substantial.

Romita Jr.’s art is as unmistakably nebulous as ever. I’ve often felt that he overdoes the “sketchiness” – he’s the only artist that could render billionaire Tony Stark like a fuzzy vagrant – but as the Hulk absorbs ten thousand adamantium bullets and New York crumbles to dust it’s hard to think of an artist better suited.

Two additional “What If?” tales are supplied, one in which Hulk sacrifices himself in order to save Caiera, who in turn takes over Earth in is name, another in which Hulk’s shuttle lands on the peaceful planet that Reed had originally plotted. The former is utterly pointless, but the latter is a nice schizophrenic take on the film Castaway, and is in many ways more intriguing than what officially transpired.

One hefty volume of unadulterated fisticuffs, World War Hulk accomplishes exactly what it set out to do, but not one iota more. It’s a fun book, with enough cameos and moments to please, if not entirely satisfy.