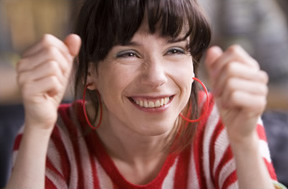 In one of Happy-Go-Lucky’s initial scenes the perpetually perky Polly enters a bookstore and begins a one-way conversation with an arrogant clerk. When her exchange reaps no rewards she cheerfully departs, her sunny disposition blemished in no way whatsoever.

Of course, as a postmodern audience weaned on irony, we are confident that within minutes Polly’s demeanour will be her downfall. To little surprise, Polly discovers her bike has been stolen. “That’s a shame, we never got to know each other,” she giggles, before happily walking home. Much like Leigh’s 1991 effort Life is Sweet, Happy-Go-Lucky is more a sequence of vignettes than the plot structure we are so accustomed to. Some may find Leigh’s refusal to follow modern cinema convention disconcerting, but beneath the giggles this is subtle, deliberate work. It’s no small coincidence that Poppy is a primary school teacher, that she refuses to mature while the progressively pained Scott bears the scars of a childhood similar to that of a disruptive child in Poppy’s class; the themes of education, childhood, and the decisions we make thorough the transition into adulthood are all explored without a trace of didacticism.

Happy-Go-Lucky is a little messy at times, with several of the sequences – the flamenco lessons under a livid Spaniard come to mind – immensely fun but entirely superfluous, and Polly’s decade-long flatmate Zoe (Alexis Zegerman) is less developed, less energetic Polly. But as ever, Leigh’s characters drive his plot.

That’s perhaps what makes his approach to film so unique; he revels in his happy heroin, her trivial life and the friends and family surrounding her. Hopefully, so do we.