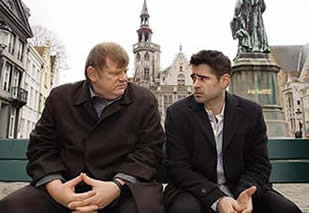 When Ratatouille was released last year, the posters bore the faux phonetic transcription (rat-a-too-ee) below the title, both acting as a pun and educating under-tens Americans how to pronounce such a dauntingly foreign – and from the perspective of cautious Disney financers, unmarketable – title.

Worryingly, the posters for In Bruges (pronounced in-broozh) tell us “it’s in Belgium”. Cultural lessons for the geographically ignorant or irreverent Irish playwright Martin McDonagh winking wryly at his predominantly teen audience? Definitely the latter. After a botched assassination in London, hitmen Ray (Farrell) and Ken (Gleeson) are ordered hang low in Bruges by gang boss Harry (Fiennes). As the placid Ken eagerly flicks through a tourist brochure and plans a series of sight-seeing excursions, lager lout Ray is deconstructed by guilt and unable to quench his conscience with twee Belgium nightlife and “gay beer.”

With Farrell’s career at a low, he really must do more films like this and the 2003 low budget Intermission; after unendurable flops like Alexander it’s easy to forget he has both talent and undeniable screen presence. Ray is a likeable thug, a guild-ridden and conflicted kid, and it’s good to see Farrell use his Irish accent.

The always superb Gleeson rounds out this odd couple with a reserved performance, the morally conscious Ken, who says more in his silences than Farrell’s motor-mouthed Ray is intellectually capable of. As the principled mob boss Harry, Ralph Fiennes tries a little too hard to ape Kingsley’s Sexy Beast, but his send-off line makes not only the character worthwhile, but the entire film.

In Bruges has received comparisons to both Beckett and Mamet. Like Mamet, McDonagh is more interested in extracting wit from his foul-mouthed characters than plot. But when the dialogue is this good it hardly matters. Like in McDonagh’s Academy Award winning short Six Shooter, which also starred Gleeson, In Bruges borders on the existential, the picturesque canalled city acting as our killers’ purgatory.

Fiennes’ entrance, and with it a contrived bullet-showered conclusion, ultimately undoes McDonagh’s unforced first act in the name of convention. Like its central characters, In Bruges feels somewhat dichotic over its intentions, but provides enough laughs through its charismatic leads that you probably won’t notice until long after. Oh, and there’s a midget in it.