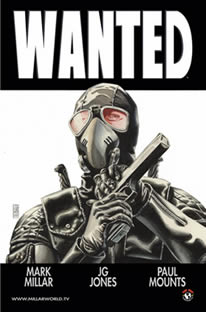 As Batman once put it: “Criminals are a superstitious and cowardly lot.” Which probably explains why they always lose. That, and no matter how impenetrable Thanos, Darkseid or Victor Von Doom believes his recently renovated fortress to be, no matter how impeccably ingenious his new scheme, Earth’s mightiest will always join forces to kick sand in the eyes of our lonely megalomaniac. In the nature of all good sci-fi, Wanted asks “what if” the world’s supervillains were able to reconcile and join forces, utilising their trademark dirty tactics and unrelenting resourcefulness to overcome their virtuous adversaries? They’d win, right?

One regular afternoon, unfulfilled white-collar worker and Eminem look-alike Wesley Gibson discovers that his father was infamous villain The Killer, and that he has inherited not only his father’s money and mantle but his superhuman marksmanship skills. Like Neo from the Matrix, this represents the escape he has always longed for, and he accepts his role under the Fraternity, a consortium of every super powered villain on the planet, without looking back.

For a comic book universe conceived for one miniseries, Wanted’s mythos is second only to that of Watchmen. JG Jones’ character designs are immediately recognisable as the archetypes and mainstream properties they mirror while being entirely original in their own right, from the Bizarro analogue Fuckwit to the faeces equivalent of Clayface, Shit-head. Yes, those are their official aliases.

Like Watchmen, Millar takes great pride in destroying these fine creations; it’s only when you read a book like Wanted that you realise how many creative restrictions the franchise factor instils on the Marvel and DC universes. It’s nice to read a superhero book that does not try desperately to lead-in to a sequel.

JG Jones presents this world with such detail that it’s easy to get lost in some of the larger panels, looking for easily-recognisable facsimiles and references to the mainstream comic companies. In one scene our heroes villains even jaunt to an alternate universe and use the Justice League for target practice.

As brilliant as Wanted is, I can’t deny that it left a bad taste in my mouth. Think Man Bites Dog with capes. Millar’s assumption that freedom is the ability to kill or rape whomever one pleases falls somewhere between extremely adolescent and despicably depraved. Wesley shows no reluctance to commence his career in mass homicide, and his lack of remorse throughout robs his descent into the underworld of any empathy. Yes, it’s well written, impeccably paced plotted and portrayed, but Wanted lacks the heart we’ve come to expect form the superhero genre. And I lament anyone capable of sympathising with central characters who proudly divulge paedophilic habits and enjoy target practice on innocent civilians. Wanted’s lack of a moral anchor unfortunately lets an excellent, expertly administered idea drift into the realm of gore-porn.

But if you can bypass Wanted’s amoral stance, both in its characters and its storytelling approach, Millar undeniably takes us on one hell of a ride. Most intriguingly, perhaps, is that a world ruled by insane super-villains bears more resemblance to ours than almost any other comicverse.