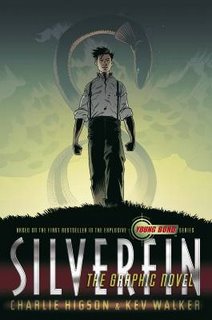 And so it is that Young James Bond, not to be confused with nephew James Bond Jr., follows in the miniature shoes of Young Sherlock Holmes and, er… the Muppet Babies by featuring in a series of children‘s stories detailing his pre-MI6 years at Eton.

After surviving a rigorous bullying programme, lil’ orphan James relocates to Loch Silverfin, Scotland to stay with his aunt during the Easter break. Like any good Scottish lake or inlet, Loch Silverfin has its own Nessie, plural; only these slippery buggers are anything but coy. Charlie Higson’s adaptation of his own novel into the comic medium is more than competent, and Kev Walker’s art is always excellent. I have always been a fan of Walker since his work on 2000AD’s A.B.C Warriors, and his at here is crisp and atmospheric, though his tendency for heavy shading does give his splendid illustrations too much of a Gothic/Victorian vibe for the 30s locales.

Given that Bond has changed, but rarely evolved, over the last 50 years without aging a day, Silverfin’s 1933 setting is somewhat off-putting. While this may correspond with the Bond of Fleming’s 50s novels, it is confusing when Daniel Craig’s iteration is so prominent featured in the media. Still, Higson was clearly writing a prequel to the books rather than the films; if he had set this tale any later it would only have riled up the Bond literature fans.

My sole complaint with Silverfin is that it just doesn’t feel like Bond. Moustachioed villain Hellebore, whose mandatory gimmick is that he injects himself with a super serum extracted from eels is more of a comic book supervillain than the millionaire mastermind that has become the staple of the Bond series. James himself is almost too agreeable, the exact opposite of the misogynistic, cold-blooded bastard he is destined to become.

There are also several woeful references to the character that made me think of the flashback skit in Austen Powers 3: Goldmember far too often. Posh girl Wilder Layless, a moniker which follows the series’ femme moniker tradition, only without the sexual innuendo, has a horse called Martini, while the number James is designated during a school sporting event is… you guessed it.

But then Silverfin isn’t made for a bitter git like me. It’s for kids who love the high octane action of James Bond’s adult adventures but are still too young to appreciate the innuendos and sexism in all its glory, and maybe the odd adult who routinely consumes anything associated with Bond. On second thought, perhaps just the former.