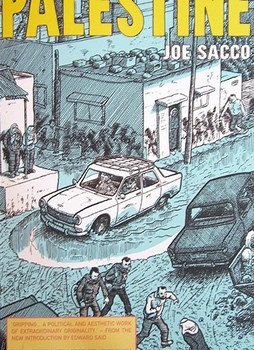 Written and illustrated by: Joe Sacco

Between 1991 and 1992, journalist Joe Sacco spent two months with the Palestinians of the West Bank and Gaza Strip. Palestine, a work of graphic non-fiction, chronicles his interviews with those persecuted under Israel’s first Intifada.

Palestine emphasises the plight of the Palestinians on an individual scale, something that the Western media often forgoes in order to narrate the “bigger picture” to the public. As Edward Said comments in the book’s introduction, the happy ending in which good conquers evil is a staple of the comic book; here there is no such conclusion on offer. The people Sacco meets are soon forgotten, the stories they have to tell left unresolved. Sacco’s art has a stream of consciousness aspect to it, though I suspect the pages were far more deliberately conceived. His words hit the page at seemingly random angles, like post-its across a photograph covered billboard, while his caricatured portraits are often drawn as if seen in the convex reflection of a spoon. Both the style of Sacco’s art, and the way in which he narrates his journey, adapt to better portray each; one man’s account of his time in prison is told in a series of tiny, rhythmically monotonous squares on a black background, while Sacco’s rural excursions are often full page shots illustrated with photographic realism.

The accounts are presented in a variety of styles, from illustrated prose to messy, furious clashes of words and images that convey his emotions on to the page. During his conversations with those he meets on his journey, Sacco is not afraid to voice his opinions, but never allows his emotions to get in the way of another’s tale. “Lets face it; my comics blockbuster depends on conflict; peace won’t pay the rent,” he openly admits.

Without bringing my own atheistic beliefs to the table, I found this book’s subjectivity its strongest point. While Sacco clearly wanted to let the plight of the (predominantly) Muslim Palestinians be heard, he is not beyond criticising their customs – often with the unapologetically un-PC wit of a Westerner who does not delude himself that his opinions could ever be impartial. Nor does he have to work hard to expose the eye-for-an-eye mentality that has tainted generations of Israelites and Palestinians alike, and will perhaps stop either side from ever allowing the other peace.

It’s this honesty that gives Palestine’s visual diary format a personality and humanity not found in sterile daily news reports. His relationship with Sameh, a placid, unemployed teacher who yearns to study a masters degree overseas, paints a contrasting portrait of the fanatical and hot tempered Muslim male that the Western media would often rather we cowered be the sofa in fear of.

Like Spiegleman’s Maus, Palestine is an absorbing if not always enjoyable read. And that’s exactly what it should be. Perhaps what’s most frightening about Joe Sacco’s stories of tragedy, oppression, racism and hatred is that almost two decades on, little has changed.

One thought on “Palestine by Joe Sacco Review”