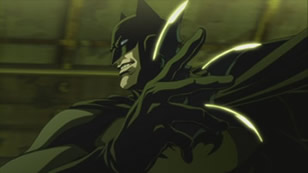 An anthology of six different shorts from six disparate art teams, Batman: Gotham Knight was perhaps an inspired concept for those who have already forgotten the Animatrix. Yet whereas the Animatrix offered different perspectives on the Matrix universe, Gotham Knight half-heartedly attempts to bring its six components together into a cohesive whole and fails. The result is an unimaginative effort which suffers from a lack of overall artistic direction. Watching Gotham Knight I felt as though I had been lied to, by both the marketing campaigns and the DVD packaging. The stories are interlocked in as flimsy a way as imaginable, and are jarringly inconsistent; in one short Gotham City resembles the futuristic cityscape of Blade Runner, in another the Neo Tokyo from Akira, with Gordon’s office set amidst neon pagodas. Batman’s costume changes throughout, as does Alfred’s appearance.

Nor does the feature fill any gaps between Batman Begins and the Dark Knight, as has been sold us. The appearances of Scarecrow, Killer Croc and Deadshot (unrecognisable from his comic counterpart) are too brief to have any significance, while several tales feel out of place with Nolan’s mythos, such as one in which Wayne, drawn to resemble Ryu from Street Fighter, receives training from a mysterious Asian woman.

Much has been made of the return of Kevin Conroy (Batman: The Animated Series) as the voice of Batman/Wayne, but somewhere along the line communications between DC and the six Japanese animation studios must have collapsed. The lip synch is painfully off, lending the effect that the piece is dubbed in a foreign language, and forcing the voice cast to talk with that uneven velocity only present in cheaply dubbed anime.

While watching Gotham Knight I could not help but think of the recent Hellboy animated films as an antithesis in approach. While those AVs countered a generic Saturday morning cartoon quality of animation with great deal of respect for the comic book and live-action source material and earnest voice acting, Gotham Knight‘s various directors are more interested in visual bedazzlement than paying tribute to the Bat.

The result is a film that, while sporadically interesting, rarely feels like Batman. As good as the animation present in Gotham Knight is, it cannot disguise a wasted opportunity.