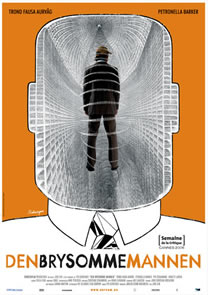 The Bothersome Man begins with perhaps the most nauseating and disparaging kiss in movie history. As he watches two adolescent lovers slurping hideously as they attempt to eat each others faces, bland everyman Andreas nonchalantly jumps in front of a passing train. Some time later, he finds himself on a bus travelling to the small and perfectly formed town of Bothersome, where he is provided a tidy home and a dull but comfortable job. Much like Dark City, The Bothersome Man is that rare breed of film which is almost impossible to describe in words but makes perfect sense while watching it. What could have been an abstract, pretentious mess is surprisingly precise in its implication. Director Jens Lien does not waste time with superfluous dialogue or “scenes”; indeed there are long stretches in which not one word is spoken. Lien keeps his central characters distant, to the point that we almost view Andreas as a zoo specimen, observing him from afar as he collects his normal wife, normal wife, normal house and normal mistress in the knowledge that he will soon leave them in pursuit of grasses greener. The level of creative restraint from Lien and screenwriter Per Schreiner is on a level just not seen in contemporary American cinema.

Despite the potentially morbid subject matter, The Bothersome Man maintains a dark wit throughout. Not unlike Jean Pierre Jeunet has in that past, Lien creates a fantasy landscape out of stark, sterile surroundings filled with characters that almost manifest a caricatured normality. Schreiner’s Kafkaesque social commentary will connect with some and alienate many more, but the minority will cherish the experience for years to come.

The Bothersome Man seems to have come and gone unheard, with painfully little recognition from audiences or critics. Usually when I see a movie as humbly innovative and original as this, I dread the possibility that Hollywood will suck the talent involved from their homeland… or worse still, announce a remake. This time however, I hope that Lien and Schreiner’s next efforts make a greater commercial impact, if for no other reason than to give The Bothersome Man the retroactive acclaim it fully deserves.