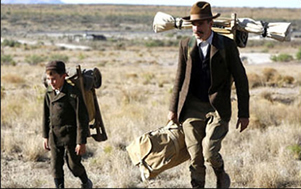 Loosely based on Upton Sinclair’s novel Oil! Paul Thomas Anderson’s most recent effort is an epic portrait of prospector Daniel Plainview (Daniel Day Lewis), an animal of a man whose lust for power is unhindered by any degree of ethic.

Greed embodied, Daniel Plainview is a character so alien to everyone around him that he would run the risk of becoming self-parody were Daniel Day-Lewis’s visceral, mesmerising turn not so consistent. Plainview’s relationship with his adopted son, whom he utilises to appeal to the Christian family values of the landowners he exploits, is the film’s true success. There is a love Plainview feels for his son, but it is a selfish love, akin to that given to a possession. We never discover Plainview genuinely loves the boy; like Citizen Kane’s Charles Foster he is incapable of expressing or receiving love. Unusually, but aptly, this is a film almost devoid of women. There Will Be Blood

Frequent comparisons have been made of Daniel Day-Lewis’s performance to that of John Huston, but it is difficult to compare the film itself to any other. At times There Will Be Blood’s numerous dialogue-free sequences, wherein Plainview’s barbaric primitiveness is accentuated by an immense soundtrack by Radiohead’s Jonny Greenwood and Robert Elswit’s bleak cinematography, are closer to Kubrick’s 2001 than anything from the Western genre.

As the God-possessed faith healer Eli Sunday, Little Miss Sunshine’s Paul Dano is equally impressive in a role that would have fitted Edward Norton ten years prior. A pompous, disillusioned fraudster, Eli’s Christian driven intentions are as intense as Plainview’s, an equally visceral grab for power, if not necessarily via money.

Unlike many of the last decades more prominent auteurs, it’s difficult to nail what make a Paul Thomas Anderson movie exactly that. His relatively small filmography is too diverse to bear comparison, yet his films all possess that certain something. Perhaps it is his preference for the metaphorical over realism that sets his works apart from many of his more superficial contemporaries. This is not a realistic film, nor does it strive to be. In There Will Be Blood, Anderson has retained his trademark quirkiness and otherworldly, almost polemic approach.

Equal parts complex and baffling, There Will Be Blood doesn’t quite wrap up as well as it should. It’s relentless, compelling viewing, fuelled by what is perhaps Day-Lewis’s greatest performance yet, but falls short of being great. Instead it’s just very, very good, a film that we can only truly appreciate on subsequent viewings.