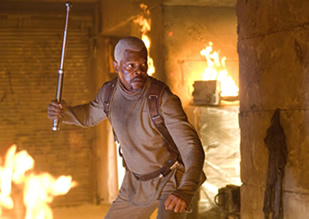 Film trailers just cannot be trusted. Take Jumper for instance, which promised an epic science fiction tale focussed on a war between “jumpers” (individuals able to teleport) and the Paladins, a religious order intent on cleansing the world of these genetic abominations. It was difficult not to get excited.

Unfortunately Jumper, director Doug Liman’s first true dud, manages to fail on almost level of potential possible. Based on a novel by Steven Gould, it’s a cold, insincere movie, where characters use their powers for the good of themselves, and villains kill for the sake of villainy. The sci-fi premise had potential, but feels as unsubstantial and hollow as its characters. Why can the jumpers jump? Who exactly are the paladins and why do they want the jumpers dead? These questions and many more, such as why Christianson landed the lead after his lacklustre performance in the Star Wars prequels, go unanswered.

The pacing problems are also unforgivable, a breakneck first act suddenly descending into a contrived romantic subplot which feels as though it was drafted from Dawson’s Creek in an attempt to a) add some character to our effeminate husk of a protagonist, and b) beef up the movies already anaemic running time.

Of the dull cast, only Jamie Bell’s Brit Jumper Griffin is vaguely intriguing, but is criminally underutilised. Griffin’s tormented, scarred back-story would have proven a far more interesting starting point for this franchise. Samuel L. Jackson, one of the few actors capable of taking this kind of B-movie schlock and making it work, is encumbered by a coiffure so ridiculous it would have looked ludicrous alongside Jean Paul Gaultier’s creations for The Fifth Element.

And then, 88 minutes in, Jumper ends before it had even started. It’s difficult to imagine any viewers who will not leave the movie disappointed, indifferent, or under the belief that they have just watched the pilot for a new Fox Network show. The film’s primary characters all behave so nonchalantly; never does our protagonist seem to be in any genuine peril, the finale face-off essentially culminating in hero and villain shrugging their shoulders and heading separate ways.

Jumper is a movie experience so bland and feebly defined, that even Liman’s trademark shaky cam direction feels like a superficial attempt to add life to a potentially interesting but ultimately stillborn franchise.