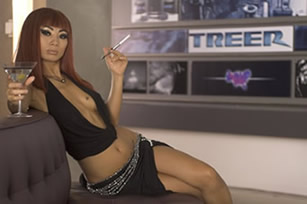 Hollywood’s underside is littered with the bodies of freakish, lifelong dreams that seemed like a good idea at the time, but retrospect should have been aborted at conception. After the success of Leon, it appeared good business sense to let Luc Besson rip with the garish, superficial Fifth Element. After the Matrix reinvented the action movie, the Wachowskis were given carte blanche and a virtually unlimited budget. The result? Two ambitious but bloated and directionless sequels that only empathised the brother’s creative limits. Likewise, you can imagine the producers at Sony Pictures rubbing their clammy hands together when Richard Kelly, fresh from his seminal debut Donny Darko, proposed his Californian sci-fi oddity Southland Tales. It would be both pointless and unfeasible to offer a tidy synopsis, or indeed summarise Southland Tales’ main elements or themes. It’s a mess of half ideas and cod philosophy, many of its elements conflicting like scenes from entirely different movies and genres.

The plot involves amnesiac film star, Boxer Santaros (Dwayne Johnson), porn star/pop star/TV presenter Krysta Now (Sarah Michelle Gellar), identical twin brothers (Seann William Scott) who may or may not be the same person, and multiple Neo-Marxist groups who all appear to have the same goal but work against each other for the sake of a tortuous running time. Meanwhile, a facially scarred Justin Timberlake watches from above, offering cumbersomely convoluted narration and routinely spouting supposedly prophetic extracts from the bible. Oh, and at some point, time travel is involved, though if you only caught the first half of the film, you’d struggle to work out where.

As satire it all falls flat, and as social or political allegory it reads like an over-imaginative undergraduate’s first attempt at writing substance. Random scenes see Kelly abandon wit for Lynchian surreal, and fail again. Kelly clearly aspires to be a Lynch for the graphic novel generation, but unlike Lynch, whose idiosyncratic method is entirely genuine, his approach always feels insincere and derivative.

Despite these and many more criticisms, there are moments, rare moments, when Southland Tales verges on intriguing. By the way this review is going, I don’t think it would be a spoiler to tell you that the multiple plot strands do not converge in any logical, or indeed impressive way. Southland remains a tangled, garbled mess from beginning to end, yet it is still incomparable to any movie before it.

So bad it’s good then? No. But that is not to say that Southland Tales is without merit. I’d recommend it, in particular to budding young filmmakers who want a list of cinematic “do nots.” Kelly aims high and flounders, but it’s a sophomoric attempt that’s anything but boring, if for all the wrong reasons.