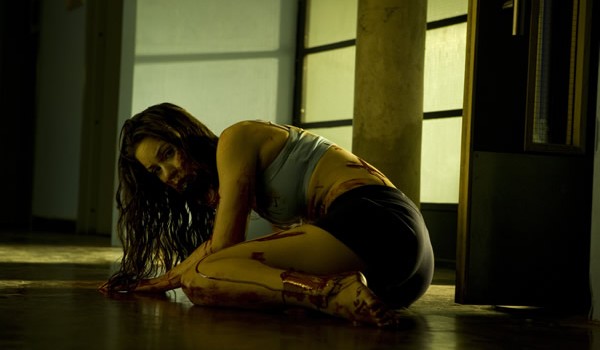 11 months after a violent altercation with a pupil lead to his suspensions, Robert Anderson is burnt-out, separated from his family and drinking on the job. He’s also the only teacher at his comprehensive prepared for an attack from murderous youths in this horror movie that, following in the wake of Eden Lake and Harry Brown, plays on Britain’s fear of faceless, blood-thirsty hoodies.

The identities or motives of our hooded hoodlums, portrayed by a team of parkour artists and seemingly capable of scaling any surface, are never disclosed. Writer/director Johannes Roberts takes great care to keep his monsters in the background; like Halloween’s Michael Myers they’re most effective when out of focus and briefly spotted darting past their unsuspecting victims. Bar a few dodgy supporting characters, F is lifted by a decent cast. David Schofield, a distinctive character actor who has appeared in everything from The Bill to Gladiator (but in the eyes of film buffs will forever remain the distracted dart player in the Slaughtered Lamb) so successfully portrays Anderson as a worthless, shattered husk that it’s difficult to root for him even when his colleagues are systematically battered to death.

Inkheart’s Eliza Bennet plays Anderson’s whiny daughter – who also, quite conveniently, happens to be in his class, while true to horror convention, Hollyoaks beauty Roxanne McKee gets to prance about in skimpy gym gear – a pithy scene that I’m sure will still adorn the DVD’s back cover – before going the way of the slasher pic slut. Inventively shot and ending upon a moral quandary far more harrowing than its anonymous phantoms, F also marks a considerable step forward for director Johannes Roberts, whose body of work has until now failed to escape straight-to-DVD hell. F offers nothing we’ve not before, but that almost goes without saying; genre fans will still find a lot to appreciate in this above average Brit horror.

Extras: A close and candid ‘making of’ doc, an interview with Roxanne McKee (which is odd given how little screen time she has) and a trailer.

F will be released in the UK on 10th January by Optimum Home Entertainment. One thought on “‘F’ DVD Review”