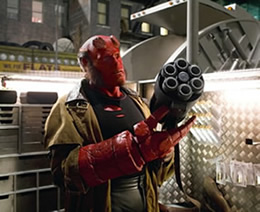 As much as it may agitate the bitter pro-auterist cinephile, there’s a lot to be said for imposed creative restriction. If the excessive Brontosaurus chase in the recent remake of King Kong proved one thing, it’s that failing to contain a man of Peter Jackson’s imagination and aptitude on such a vast project will only result in on-screen indulgence. Likewise, Guillermo del Toro’s Spanish efforts, particularly The Devil’s Backbone and the awards darling Pan’s Labyrinth, have regularly proven far more intimate efforts than his Hollywood offerings. Admittedly, I’ve loved those too; but there was the sense in both Blade 2 and the original Hellboy that despite his unarguable talent, our favourite Mexican (sorry Benicio, Speedy) does not know when to stop. During Hellboy II‘s more cluttered moments it could be argued that the director doesn’t know when to hold back the ideas, but I for one am grateful for his shortcoming.

Like Jackson’s did with Kong, with Hellboy II del Toro pays tribute to the movie monsters of  old; Harryhausen, Hammer and even anime such as Princess Mononoke. Unless you were a twelve year-old weaned on video games and reality TV it was difficult not to be worn down by Hellboy‘s succession of monster fights, with the more interesting character moments each feeling like an interval between the last creature encounter and the next. Del Toro has added twice as many such fights to this predecessor, yet Hellboy 2 never loses focus of its characters. The monsters themselves are possibly the most ingenious and original seen on screen, all presented with an appreciation and affection not before captured outside of a Harryhausen creation.

So, the story… as with the original Hellboy, del Toro spends so much time lavishing his heroes and their antagonists with “little moments” that there is barely room for a plot. Essentially repeating his underrated performance in Blade II, Luke Goss excels as the spear swinging Prince Nuada, Elf Prince of the Underworld, a title that is far less discomfiting in the context of the film. Many critics have criticised Goss for impressing the necessary sense of menace, but that’s perhaps the point; though his methods are a tad extreme Nuada is arguably the good guy, the spokesperson for nature’s retaliation against man. But as del Toro piles the action on one scene after the next, his plight does get somewhat lost.

Ron Perlman is once again great as the eponymous, blue-collar demon, lending the character a sympathetic edge that the recent iteration of Batman lacked. Red is the downtrodden clean-up guy who never gets his due, and we can’t help but love him for it. Doug Jones, now adding his voice to the gill-man Abe Sapien is equally compelling, while Seth MacFarlane adds comic relief as the ethereal German, Johann Krauss. Oddly it’s Selma Blair’s Liz Sherman, the only member of our crew who is human in appearance, who feels underdeveloped and uninteresting.

Hellboy 2 doesn’t surpass the likes of The Dark Knight, nor was it ever going to. This is a silver screen experience of brawn over brains, a heavy handed second helping for those who enjoyed the first. Del Toro has no pretensions about his work, and has produced a piece of cinematic fluff that is not only visually and imaginatively sumptuous, but treats its cast of misfits with genuine affection.