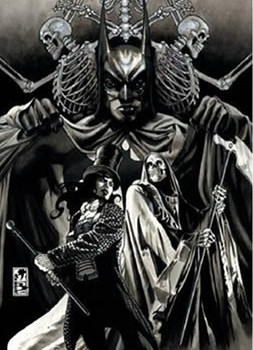 Perhaps more than any mainstream comic property, Batman is perfectly suited for short stories, due in parts to the character being firmly rooted in the noir/crime genre. The Bruce Timm and Paul Dini animated series encapsulated this dimension of the caped crusader better than any other interpretation, and writer Dini returns here with more minor cases. Overall, this isn’t as good or cohesive a collection as his previous Batman: Detective, though it does continue on loosely from that book. Both ‘Shark Bite’ and McGraw’s ‘Triage’ maintain the detective element, focussing on the Dark Knight’s cerebral proficiency – and his Sherlock Holmes repertoire of criminal aliases – rather than his physical prowess. By reinventing the Riddler as Batman’s rival sleuth, Dini emphasises this further. It’s also a great direction for Edward Nigma; he was always more the intellectual prankster than the sadistic psychopath that has become the norm for Gotham’s rogues gallery. By beating the Bat to his crimes, Riddler is still provided an outlet for his intellect. I for one hope that they do not revert Nigma back to his usual antics any time soon, as is usually the way with Bat-villains.

In ‘Double Talk’ and ‘Kind of Like Family’ Dini offers us a new, femme-fatale take on the Ventriloquist. The character has been on hold since Arnold Wesker was killed by the Great White Shark, but the domineering puppet Scarface has resurfaced, now controlled by (or controlling) Peyton Riley / Sugar, a Jessica Rabbit style moll with a penchant for exploding decoys. Like Wesker, she plays second fiddle to Scarface’s plans, and is as much a lost soul as any of Gotham’s scum.

A lot of writers struggle to integrate Robin into the Dark Knight’s regime, but Stuart Moore’s sidekick-centric two-parter ‘Siege’ works because he treats the boy wonder more a as partner than a pupil. The villain here, a novel liquid explosives expert named Vox, is a kind of politically directed Firefly, who wishes to emphasise his beliefs by blowing up Wayne Tower.

In The finale, ‘Trust’, Dini wraps up the Ivar Loxias thread. The flamboyant stage magician has played a minor role throughout his run, and has now resorted to killing his assistants as a publicity stunt. I shan’t say who Loxias is, or what he wants, but the story takes a delightfully gruesome course. Any tale featuring Zantanna is worth a read; though relations between Wayne and her are still uneasy after the mind-erasing incident exposed in Identity Crisis.

There’s nothing particularly essential here; this is simply classic Batman told well. As with the writing, the art, pencilled by Don Kramer and Andy Clarke, is clean, crisp and does its job. What more could you ask for?