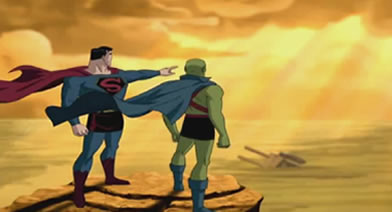 While DC’s first direct-to-video animated film Superman: Doomsday wasn’t disastrous, for the sake of brevity it abandoned all but a few key features of the original comic arc and was overall an unenthusiastic and lifeless affair. From New Frontier’s introductory narrative, which concludes on the narrator blowing his brains out, to the razor sharp Hitchcock inspired 50s title sequence, DC’s second animated feature is an altogether classier act, with a level of maturity that will appeal to older viewers without alienating the littluns.

Much of New Frontier’s success can be put down to its source material. There are few graphic novels in DC’s back catalogue that are better suited to such an animated movie. What Darwyn Cooke did so well with New Frontier was provide both an accessible introduction to the DC Universe and an intelligent allegory on McCarthyism, the Cold War and the civil rights issues of 50s America. Though the original graphic novel was labelled an Elseworlds title, New Frontier follows the super-powered individuals that will soon form the Justice League of America, even if there technically isn’t a JLA in this movie. Each character’s origin slotted perfectly into Cooke’s intricate tale without deviating unrecognisably from canon. Certain scenes have had to be cut from that book, notably the ill-fated Losers expedition on Dinosaur Island and the grim John Henry Iron/white supremacist subplot, but these are still referenced in the movie, if only to appease the more particular viewers. My favourite plot strand, the Martian Manhunter’s teleportation to Earth by Dr. Erdel, and his use of the Chandleresque detective guise John Jones, is kept intact. It’s also great to see other characters that have yet to be oversaturated in other media, with B-listers as Adam Strange, Rick Flag, Challengers of the Unknown, Will Magnus and the Blackhawks making appearances too.

Aesthetically, the film is animated in a charmingly retro style that fits somewhere between Darwyne Cook’s art, the Fleisher Superman cartoons and Batman: The Animated Series which Cooke did indeed work on. The voice acting is also superb, as is Kevin Manthei’s score, which is in turns ominous and uplifting.

As with Cooke’s source material, the impending world threat The Center – a living island that, um, shoots dinosaurs – is a complete cop-out. But by the time the world’s finest have combined their forces for the first time, you’ll be enjoying it all too much to really care.  New Frontier is an absolute delight; it’s got more heart than most live action superhero movies, and should be seen by everyone with an interest in the DCU.