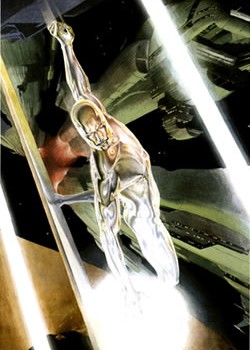 Could there be a more hippyish comic book creation than the Silver Surfer? A metallic dude who surfs the cosmos, refusing to cover his androgynous shame lest it cramp his streamline style. The Fabulous Freak Brothers have nothing on Norrin Radd.

While popular culture has latched onto the Surfer as an icon, Marvel themselves have always had a difficult time selling Jack Kirby’s pacifistic journeyman to their regular audience, who would rather see Wolverine impale his umpteenth goon than read about an introspective, anguished fellow who may wield the Power Cosmic, but is hesitant to use it. Which is a shame, because as far as storytelling scope goes, the Silver Surfer is definitely in the upper tier of Marvel properties. Requiem begins with Silver Surfer paying the Baxter Building a visit. Norrin Radd is dying; the metallic substance that lines his body evidently has a limited lifespan and is rapidly deteriorating. His time limited, the Surfer heads homeward, to the people and the planet he once sacrificed everything for, visiting a few familiar faces along the way, and even ending a petty spiritual war that has raged for millennia.

The original Requiem miniseries was released to coincide with the appearance of the Surfer in Fantastic Four 2: rise of the Silver Surfer, and the recognisable cameos will appeal to those reeled in by that movie. The main drawback to this approach is that one quarter of the book is squandered on the obligatory Spider-man cameo; while Peter Parker’s “everyday” problems are not without their charms, in a story such as this they come across as not only trivial but irritating. The Surfer’s final action is rather wonderful though, and has a hushed intimacy about it that epitomises everything the character has ever been about.

Esad Ribic’s stunning artwork, which has so far mainly been confined to covers, will be the selling point of Requiem for many. His paintings will obviously draw comparisons with Alex Ross’s series such as Justice and Kingdom Come, and they are of an equally high quality. Ribic succeeds in making the blank abyss of space look far more interesting than it actually is; the Surfer’s passage through enchanting multicoloured nebulas, gas clouds and other celestial phenomenon I’m too ignorant to be able to name, lends a silent poignancy worth more than any quantity of words. Requiem is one of the few graphic novels for which I’d recommend shelling out the extra cash for the slightly larger hardback edition.

Straczynski always supplies a healthy dose of pathos, and Ribic’s art is beautiful, but Requiem is a quality production weighed down by predictable execution, and much to my surprise left me feeling a tad empty. The Silver Surfer’s epitaph has heart but no soul. Still, it is a very pretty book.