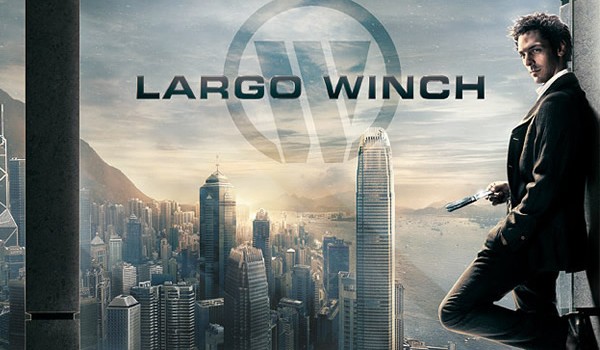 With western economies still struggling to recover from one of the fiercest recessions in the last hundred years, Largo Winch: Deadly Revenge, the movie adaptation of the popular billionaire businessman, couldn’t have come at a worse time. While I’m only vaguely familiar with the Belgian comic book from which it originates, I’m guessing that considerable changes were made to the principal character in order to sell this seventeen volume graphic novel saga (this film comprises the first two) outside of French-speaking countries.

For those unsure quite what a Largo Winch is, he’s the adopted son of tycoon Nerio Winch (Miki Manojlovic), who has used Largo as a sort of insurance policy should he meet a sudden demise. When Winch Sr. is indeed murdered, Largo must protect his inherited empire from an onslaught of competitors while working with his father’s loyal servant Freddy (Gilbert Melki, sporting the obligatory facial scar) to find out just who he can and can’t trust. From a cynical perspective, Deadly Revenge is a blatant attempt at a Gallic James Bond, with an action packed globetrotting conspiracy plot, a suave yet stubbly action hero, double-crossings aplenty and a vast league of disposable henchmen. And much like Ian Flemming’s super spy there are enough Largo books to last several decades’ worth of adaptation.

Funnily enough, the press release I received with this DVD compares the character to Jason Bourne, which not only indicates how far out of favour Bond has fallen, but that the filmmakers have attempted to make Winch as complex and sympathetic a hero as possible. While Tomer Sisley was clearly chosen for his rugged good looks, he brings a certain pacifism to Largo, an orphan who has had destiny thrust upon him and neither wants nor begrudges his fortune. Amongst the French supporting cast is the bilingual Kristen Scott Thomas, sporting a bizarre bowl cut so distinctly evil that you could only be forgiven for thinking her benevolence genuine if you’d never seen another action movie in your entire life.

Jérôme Salle stretches a modest budget pretty damn far, with exotic shots of disparate Hong Kong and Brazilian landscape making you feel as though you’re watching something far more epic than you actually are. Like the most recent Bond escapades, Largo Winch: Deadly Revenge is a bit too po-faced for its own good; Julien Rappeneau’s script doesn’t quite convince us why we should invest in the character and would have been far better suited to a TV pilot (though apparently a Largo series was made in 2001). But while none of the revelations offered in the third act prove especially shocking, the plentiful action scenes – a helicopter chase, a bike chase, and so on – are delivered with aplomb. Salle’s emphasis on solid stunt work over flimsy CGI just about raises this movie a notch above similar Hollywood fare. The DVD I viewed featured an awkward blend of subtitled French and dubbed English, with a bewildered Benedict Wong in particular sounding like he’s just wandered in from a 70s chopsocky movie. Criminally, there’s no option to switch to a single language. I can‘t quite see the logic behind this. As much as I loathe dubbing, I can appreciate why there might be a dubbed track alongside the subtitled foreign language; yet this version’s 50/50 mix is more likely to alienate world cinema and action flick fans alike than cater to a universal audience.

Despite the dubbing issue and the fact that it treads no new ground whatsoever, Largo Winch: Deadly Revenge offers an entertaining enough ride that does a decent job of (re)introducing the popular comic creation to a wider audience., even if it never quite evades the shadows of the successful franchises it so desperately wants to emulate.

Extras: Just a trailer. A bit of a missed opportunity really, as a small feature on the comic and its popularity in France and Belgium would have acted as a primer for those unfamiliar with the source material.