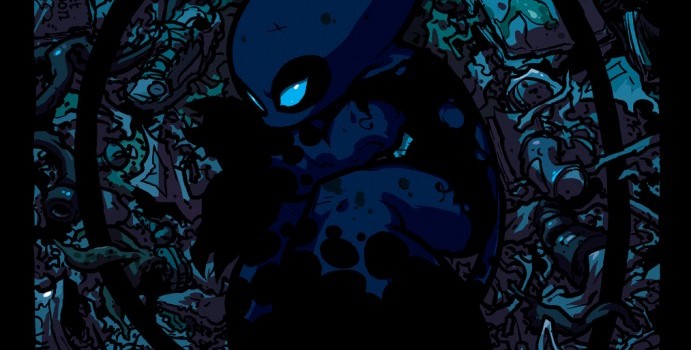 Ross Campbell’s Shadoweyes is the tale of teenage misfit Scout Montana, who after a failed attempt at vigilantism is clumped on the head with a brick and finds herself transformed into the eponymous blue-skinned creature. Scout is initially able to return to her human form, but she soon finds herself trapped in the mutated body of her alter ego, and isolated from her family and friends.

Shadoweyes is set in the futuristic cityscape of Dranac, in the year 200X – which not only fills my nostalgia-addicted heart with fond memories of 1980s videogames, but makes me wonder whether or not the date should be 20XX. This is a dystopian world where criminals victimise the populace without repercussion and vigilantism is commonplace… yet our central paupers are still able to afford such luxuries as computer games and digital cameras. But then this probably isn’t a book where logic should be applied. Teenager Scout and her “intersex” best friend Kyisha’s first foray into crime fighting is treated like a jolly Huckleberry Finn adventure, while Scout’s transformation into the bulb-headed Shadoweyes is never actually explained or thoroughly questioned by the supporting cast. There’s a definite manga influence here, not so much in Campbell’s art style or trash-constructed landscape but in his approach to storytelling. Give the analytical region of your cranium a break and just enjoy the ride.

Campbell’s art black and white art keeps the story engrossing throughout. His predominantly black cast lends the book a distinct look and charm, and the ramshackled city is brilliantly visualised at all times. Shadoweyes herself is the visual anomaly here, a cartoon creation amongst semi-realistic humans. That may be fully intentional, but it’s still difficult at times to sustain one’s already suspended disbelief and embrace the notion that these incongruously rendered elements could exist in the same universe. I realise that Shadoweyes isn’t aimed at readers of my many years, and I suspect that the predominantly female cast will appeal to teenage girls who might be turned off by the more violent, testosterone-fuelled comics on the shelf. While there are scenes of violence here Scout’s perp-bashing is frequently reflected upon and never fetishised as it so often is in other superhero tales.

I’d happily return to Campbell’s homely story and human characters again, and a second volume, tellingly titled Shadoweyes in Love, is on its way. Just don’t let the book’s grim cover and mutant vigilante premise fool you; Shadoweyes is far more a soap opera serial concerning friendship and acceptance, in which the protagonist just happens to be superhuman blue… um… thing?