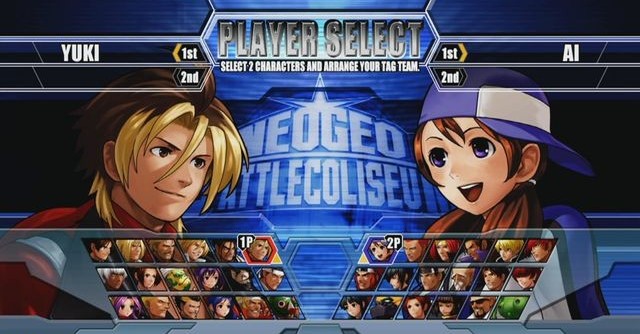 You’ve got to feel for the few surviving SNK stalwarts out there. While Capcom not only revitalised the fighting genre with Street Fighter IV but continues to tease gamers and comic geeks alike with the dream match extravaganza that is Marvel vs. Capcom 3, SNK Playmore has only further alienated its niche fanbase. The most recent King of Fighters instalment was let down by shoddy presentation, a barebones single player mode and a multiplayer experience crippled by a poor netcode. And Samurai Showdown: Sen pretty much disappeared the week it was released. Like the aforementioned Marvel vs. Capcom series, Battle Coliseum offers a dream match of sorts, only the forty-plus characters here are derived from almost two decades of Neo Geo gaming. Casual or younger gamers who barely recognise Terry Bogard won’t have a clue who anyone is, but from mechanised ape Cyber Woo to the tentacled Mars People (a Metal Slug antagonist) these sprites have more than enough personality to stand on their own merits.

The tag-team gameplay will also be familiar those who’ve played Capcom’s earlier Versus games (i.e. before Marvel vs. Capcom 2 upped the teams to three per side). Each player selects two combatants, who can be switched during the fight so that the wounded partner can recuperate the red portion of their health bar. The now obligatory power gauge at the bottom left/right of the screen allows the standard ‘Super Deadly Moves’ as well as the ability to summon your team-mate. The move lists for each character are really impressive, with newcomers Yuki and Ai each having a unique style that could potentially take months to master. Fatal Fury’s kung fu baldy Tung Fu Rue deserves a special mention, with many of his special moves transforming him from a decrepit old man into a brute the size of the Hulk.

Few characters feel like clones, and the obvious pugilists aside there are characters from such minor SNK efforts as World Heroes and Aggressors of Dark Kombat. Whether those last two titles mean anything to you is probably as good a way as any to determine whether or not Battle Coliseum is worth your 800 MS Points. The true benefit of having such a varied cast becomes evident when, after a few hours online (more on that later), you realise that you’ve seldom seen the same character twice in a row. Familiar faces Kyo and Terry Bogard do pop up with greater frequency than the more obscure creations, but there’s no Ken equivalent here. The two-on-two structure also keeps gameplay fresh, and while some pairings – Terry Bogard and Rock Howard, for example – have Double Assaults that combine their abilities, experimentation is key to fully understanding and appreciating this game. Now, you might have noted earlier that when I compared Battle Coliseum to Garou (also available on Xbox Live for 800 MS Points) I stated that it was a “superior package.” It’s not necessarily a better game, mind; even today, Garou’s balanced roster still takes some beating. But the widescreen accommodation, a graphics filter that genuinely improves the character sprites as opposed to crudely blurring them, and a selection of 3D backdrops both inventive and diverse make Battle Coliseum the finer entry point for the SNK curious.

The question apprehensive spenders will probably be asking is whether Battle Coliseum’s online capabilities have improved. Re: is this game actually playable over Xbox Live? I’ll answer with a hesitant thumb up (don’t sue me, Ebert) and say that I was pleasantly surprised with my time online. There were still a reasonable percentage of laggy matches, predominantly with overseas players – which, given the United Kingdom’s meagre SNK fanbase is nigh on everybody. But most matches played pretty slickly, and overall I’d rate the game’s online proficiency on the same level as Super Street Fighter II Turbo HD Remix.

It ain’t all slap happy shenanigans, though. Unlike the Live iteration of KOF ’98 there’s no training mode here to help novices understand the game’s bewildering tag team mechanics, and the instruction sheet provided is sparse to the point of redundant. And let us remember that this is a port of a 2007 PS2 game, itself a port of a 2005 arcade entry. Visually, the Atomisware tech holds up far better than the last Neo Geo titles, but one can’t help but feel that had SNK Playmore released Battle Coliseum a year and a half earlier, it wouldn’t look so deficient compared alongside contemporary, HD fighters such as BlazBlue.

I’m not going to criticise the game for failing to control with a gamepad as well as it does with an arcade stick. Pricey peripherals may have already relegated today’s fighters to the realm of the hardcore enthusiast, but that’s almost a staple of the genre itself. But the fact remains that the 360’s pad is not suited to fighting games, and the often ridiculously tricky Super Deadly Moves are impossible to pull off with any regularity via the standard controller.

It may seem a bit of a cop out to summarise Neo Geo Battle Coliseum as “one for the SNK fans,” but in the case of this particular port that’s possibly the highest form of compliment available. Outside of a few Capcom collaborations, SNK’s titles have never appealed to mainstream gamers, and probably never will. From its vast roster of combatants to the additional art galleries and the ability to switch between the classic BGM and a newly arranged version, Battle Coliseum is the very embodiment of fan service. It probably won’t win SNK Playmore any converts, but after the lacklustre KOF XII, it’s enough to convince us that the former fighting luminaries are slowly beginning to listen to their followers.