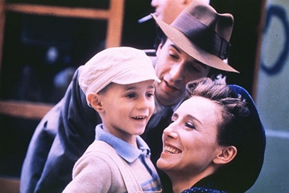 Whimsical buffoon Guido Orefice (Benigni) arrives in Arezzo with plans to open a book shop, and soon wins the affection of upper-class Dora (Braschi). But their harmony is disrupted when it is revealed that Guido is Jewish, and he and son Giosuè are taken to a concentration camp. In an attempt to keep Giosuè alive, Guido creates an elaborate illusion, convincing his son that the ordeal is in fact just a game, in which the winner will drive out in a tank.

If ever there’s a subject ever ripe for comedy, it’s probably not the Holocaust.

Chaplin made light of the Nazi’s in The Great Dictator without touching upon the subject. Mel Brookes had success with the satirical The Producers and a 1983 remake of To Be or Not to Be, while Jerry Lewis’s The Clown Who Cried, to this day unreleased, practically destroyed the funny-man. Despite its tragic backdrop, Roberto Benigni’s Life is Beautiful, a light-hearted rose-tinted tale of the human spirit, works. It shouldn’t, but it does.

A story in two marginally different acts, Benigni’s film begins several years before Italy’s Nazi rule. With an irreverent tone reminiscent of 30s Hollywood, Benigni’s physical humour is straight from the silent era, with a bickering double act that resembles a rapid-Italian Abbot and Costello. Benigni, who Western audiences might recognise from several collaborations with Jim Jarmusch (Down by Law, Night on Earth) is comparable to Jim Carrey in his mannerisms, relentlessly spidery and permanently on fast-forward in even the most sombre scenes.

The first hour is a fluffy, romantic farce which bounces from delightful to irritating as randomly as its chinless Chaplin, as Benigni resorts to various degrees of slapstick to win the heart of his “Princess” Dora (Benigni’s real-life wife Nicoletta Braschi). It is only in the second act that we discover that Guido is Jewish, and his family is soon boarding the train to an unnamed concentration camp.

What makes Life is Beautiful so extraordinary is Benigni’s ability to sustain a fairy tale magic throughout. Despite the second half’s morbid flavour, the movie’s frothiness does not falter until the very end. The use of Offenbach‘s operetta Les Contes d’Hoffmann during both acts, first in an opera house and later over the camp’s loud speaker, gives the movie a coherency despite its seemingly conflicting themes.

Life is Beautiful is often criticised for its unrealistic depiction of the holocaust. But Benigni is not aiming for a Schindler’s List. His film is a smaller, more delicate tale, a masterful work hidden beneath a clownish façade.