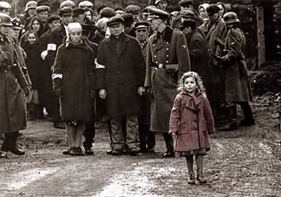 Despite, or due to its controversial subject matter, Schindler’s List received unanimous praise on release. Considered the most realistic cinematic depiction of the Holocaust, this frank picture, its imagery almost documentary at times, is remarkable less for its graphic violence than its subtlety.

Initially motivated by greed, Schindler sees the Jews as cheap labour, and their executions as financial losses. But after witnessing the clearing of the Krakow ghetto, his priories gradually shift. Spielberg never gives Schindler a distinct turning point; despite his worthy actions, he is never portrayed as a hero or saviour, but a man who had opportunity to do good and eventually did. Schindler’s flavour for gambling, womanising and drinking are shown in excess, but never commented upon. Liam Neeson is exceptionally subdued and understated, the cold suit to Ben Kinsley’s quieter but decidedly more human Itzhak Stern. The friendship between them that Spielberg delicately builds upon is one of the film’s greatest pleasures. Fiennes is ‘interesting’ as Amon Göth, the sweaty, psychopathic commandment of Płaszów concentration camp who kills randomly and without reason.

Spielberg’s ability to juggle between the individual and the national is what makes the film work, and he directs with distanced restraint. Alongside Munich, Schindler’s List reminds us that he is perhaps the most diverse filmmaker of all time. The girl in the red coat remains one of Spielberg’s most inspired visuals, a splash of colour in an otherwise black and white feature representing the emotional attachment that Oskar places on one individual Jew while thousands more die around her.

John William’s uncharacteristically haunting score sounds like it has been drafted from several different movie genres, each suiting the vast range of emotions on display with expert precision. As Williams would later prove on Catch Me if You Can, he can match Spielberg’s diversity at every step.

Unsurprisingly, the film has now been subjected to a decade of scrutiny. The omission of homosexual and black prisoners is a little baffling, but forgivable, though a morbid fixation on the psychotic Göth adds little to the overall piece. Stern excluded, the large Jewish supporting cast consists of transparent stereotypes.

It unfortunate that Spielberg could not restrain himself for the film’s 3 hour running time, resorting to his trademark schmaltz in the final minutes. The Jews farewell to Oskar wouldn’t have been out of place in E.T. while the final colour sequence, in which the cast and their surviving real-life counterparts place flowers on his gravestone reeks of a sentimentalism that Spielberg had worked so hard to avoid.

Schindler’s List is a great film, and a worthy film, ultimately deprived a seat beside the greatest because of Spielberg’s need for a Hollywood ending. The strength of those who endured the Holocaust does not need an injection of morality to be truly powerful.