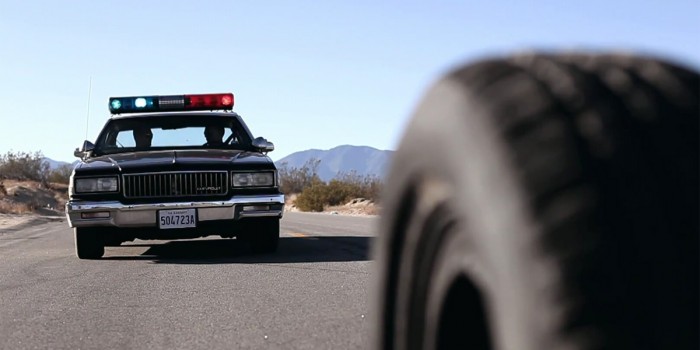 A bespectacled man stands by a dozen or so wooden chairs on a desolate highway. A police car approaches, knocking down the chairs as though they formed a driving course, and halts. A lawman climbs from out of the car’s boot, and asks the audience a series of movie-related questions, answering each one in turn with “no reason.” The police leave, and the bespectacled man turns to said audience, now part of the picture, providing them with binoculars through which to view the scene of a tire rising from the sand…

Thus begins Rubber, Quentin Dupieux’s bizarre tale of Robert, a sentient car tire with the ability to make organic matter (in particular, human heads) explode. It soon becomes apparent that what was suggested by the trailer as a straightforward horror parody – think Tobe Hooper’s The Mangler, only watchable – is a clever, if somewhat smug, commentary on viewer anticipation. Probably. Michael Haneke did a similar thing, twice, with Funny Games, though that film at least succeeded in being an effective horror despite its metafictional leanings. French music producer Quentin Dupieux, best known for creating that infectious tune for the Flat Eric Levi’s commercials under the pseudonym Mr Oizo, isn’t interested in scaring his audience. I’m not entirely sure he’s interested in making his audience think, either, despite the film’s prevailing “no reason” philosophy. Yet Rubber‘s on-screen spectators, in turn being observed by us, just about provide enough food for thought to stretch what should have been a 10 minute short into a feature length movie. And even then, it’s only 80 minutes long.

Rubber is essentially an experiment, then, but Dupieux’s second feature has marked him out as an outstanding director, if an equally pretentious filmmaker. This may well be the first movie I’ve ever watched and wished for something just a little less artsy and a bit more trashy; Rubber‘s narrative so frequently breaks the fourth wall that, while I was never bored, I was unremittingly prevented from being engrossed. Extras: Numerous interviews with Dupieux and the cast, first camera tests, and a trailer.

Rubber will be available in the UK on 11th April, from Optimum Home Releasing.