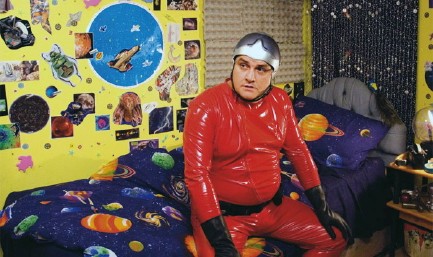 Extraterrestrial invaders battle for the quaint town of Ballymoran in this low budget Irish comedy. Only, Zonad and his archnemesis Bonad aren’t aliens but two escaped lunatics – unlike “prot” in K-Pax, there’s no question as to whether these unlikely champions are anything but shysters. Zonad exists in its own tiny universe, a town constructed out of tropes taken from Irish comedy, 50s Americana and Carry On movies. A fugitive effortlessly convinces the residents of Ballymoran that he’s a superior life form, exploiting townfolk gullibility to enjoy Ballymoran’s ale and insatiable women. That is, until his fellow escapee rolls into town, taking up the role of his replacement Bonad, who proves equally popular with women and unsuspecting husbands alike. Oddly, the dozens of schoolgirls Zonad and Bonad both seduce are clearly played by women in their twenties – presumably as both a playful sight gag and to avoid more serious paedophilia accusations.

Zonad’s TV-level budget only further accentuates its charm, though the script often feels sloppy, and at times no more than a feature-length afternoon play. I wouldn’t be surprised if the film was originally conceived as a television series. The usual serial staples are present, such as the curmudgeonly barman and comical  local drunk, complementing a gentle humour that’s somewhere between Ballykissangel and Father Ted. But the cast, an assortment of “where have I seen him/her before?” faces clearly had a ball making Zonad; all ham it up with tongues planted firmly in cheeks, and it’s difficult not to get lured in by the film’s cumbersome quirkiness. It’s far from a great film, or even a particularly good one, but Zonad gets by on its earnest charm. Low budget sci-fi movies generally either fall victim to lofty ambitions or provide little beyond mainstream knock-offs, but writers/directors John Carney and Kieran Carney have made a film that revels in its crappiness, and somehow comes out all the better for it.

Extras: There’s a big bag of extras for this little film, including a directors’ commentary, numerous deleted scenes and outtakes, love songs by Zonad, and the winning short from a promotional competition, in which filmmakers were asked to shoot something around the concept of an alien landing in an Irish village.