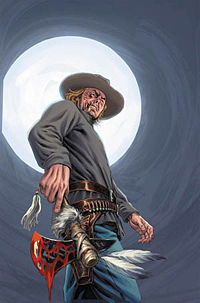 Titbits I collected while desperately wandering the internet on a midnight caffeine high:

According to an interview with David Goyer on IESB, Warner Bros. have temporarily put all of their DC related projects on hold. Given the Dark Knight’s recent success, it’s far more likely that they are plotting something similar to Marvel’s Avengers project. Justice League? Green Lantern? Catwoman 2? Who knows.

I hope it doesn’t hinder Goyer’s Green Arrow project Supermax, mind, as I liked the idea of a prison break movie featuring the curmudgeonly archer. Jonah Hex Rides Back into Town…

… after having seemingly left only five minutes ago when Crank directors Mark Neveldine and Brian Taylor departed the troubled project late last year. THR.com has it that Jimmy Hayward is now in place to direct. Josh Brolin is still set to s.tar as the eponymous cowboy.

Hayward’s sole directorial feature so far has been the surreal Dr. Seuss adaptation Horton Hears a Who, though he has been involved as an animator for numerous Pixar movies, as well as the fab CGI animated series ReBoot. So cut him some slack.

Oh, and a smaller niblet: Danny Boyle has denied his involvement in a Judge Dredd sequel to Empire. Thank fuck; it’d be a waste of his talents.