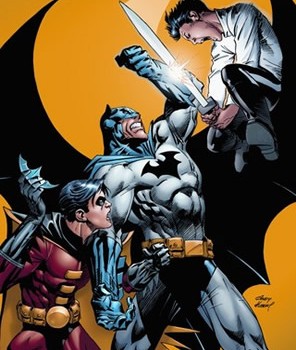 Grant Morrison’s nineties runs on titles such as Animal Man and Doom Patrol showcased not only the virtually limitless scope of his imagination, but his ability to take franchises that were long considered embarrassments by publisher DC, and make them hot property. Though Morrison has written Batman before, notably Arkham Asylum and Gotham, Batman & Son is the first time he has been given carte blanch with the title. Unlike Animal Man, Batman is a character that has been transformed and refined so many times over the last eight decades that his background, supporting cast and the drive behind his campaign have almost reached a level of perfection. Though no one could knock Batman & Son for being unadventurous, Morrison instantly introduces several changes to Wayne Manor that will have many readers up in arms; chiefly the introduction of Bruce Wayne’s son, Damian. Damian is the product of brief affair between Batman and Talia Al Ghul in Mike W. Barr’s excellent Son of the Demon, which was scrunched up and tossed into the great wastepaper bin of ideas alongside much of pre-Crisis DC continuity, but is now canon once again as a result of Superboy-Prime’s reality altering mischief. I’m not against the idea of Batman having a son, or indeed the character – and this is the first of several big changes to the Bat – Damian’s feels a little insubstantial.

I have always defended Robin, and the vibrant sidekick’s role in the Batman mythos. Whereas a solitary Batman works better in the movies, in that eternal spandex soap opera we call the DCU the character’s storytelling potential would be rather limited without his supporting cast, which spans far beyond Alfred and Jim Gordon. Tim Drake, by far the least awkward of his sires, humanises Batman, recently emphasised Wayne’s recent decision to adopt him. But while Damian could have been an interesting addition to the Bat-family, Morrison has yet to sell him particularly well; he is instead a psychopathic twelve year-old (or there about), whose allegiance is torn between the mother who never loved him and the father who never knew him, and his arrival doesn’t seem to shake up Wayne’s world as much as it should.

The problem with Batman & Son’s eponymous episode is one of tone. Morrison does not seem to be sure whether he’s writing a conventional “event” book or pushing Batman to the brink of 2000AD-esque parody. The latter would be completely acceptable if the book was at all consistent; even by contemporary DC Universe standards a militia of katana wielding ninja Man-bats moves beyond camp and into the territory of cringe inducing. Rob Liefeld is probably twirling his baseball cap in envy, wondering why he hadn’t thought of it first.

Joker-centric short story ‘The Clown at Midnight’ caused a brief commotion on its initial release, as it is not a comic but illustrated prose. A graphic novel at it’s most literal, then. Morrison’s writing style is expectedly pretentious, burgeoned with metaphors, and the entire exercise comes across as an interesting but unjustifiable experiment, with Guy Van Fleet’s sparkling computer art too cold and impersonal to work in this manner. Worse still, the decision to impose the print over illustrated backgrounds makes reading more than several pages at a time akin to gobbling an all you can eat buffet while riding a perpetual rollercoaster.

Lastly, we have the bizarre ‘Three Ghosts of Batman’ story, which touches upon an earlier incident in which a cop impersonating Batman shot the Joker, by introducing a second impostor; a venom pumping Bane-alike in a cape. The third ghost section, in which a further Bat-clone is antagonising Gotham some twenty years into the future, gets even stranger when we discover who inherited Wayne’s mantle. I doubt that even the most astute reader will have a clue where any of this is going, but then Morrison has always written in a layered fashion, and I fully expect these disparate plot threads to come together at a later date.

But mere promises of revelations lead only to frustration, and until that later date, Batman & Son’s ambitious parts make for a disjointed whole. Andy Kubert’s art is dynamic but equally inconsistent, and the lead up tot Batman R.I.P. is so far an oddity that may appeal to Grant Morrison fans but will baffle anyone else.