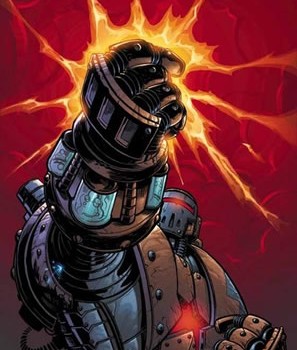 Tiny drops of speculation I inhaled while swimming the vast oceans of the web this week:

The Iron Man 2 rumour currently spreading across the internet like wildfire, courtesy of THR.com is that comeback kid Mickey Rourke and the excellent Sam Rockwell are in talks to play Stark’s dual antagonists. People are speculating all sorts of roles, including Whiplash (ugh), though the general consensus is that Rourke will fill the suit of Crimson Dynamo and that Rockwell will play Justin Hammer, Stark’s business rival. If this is true, the sequel will likely be heavily inspired by the Armor Wars comic arc.

Also rumoured is that another Russian, former KGB assassin Black Widow will be involved at some point. It wouldn’t be surprising, as her inclusion would make for yet another potential addition to the Avengers roster. The ending of the anticipated Thor movie is apparently being rewritten to accommodate the Avengers tie-in, according to IESB.com. While it had originally been confirmed that the film would take place entirely in Asgard, lending it a strong fantasy vibe, the plan is now to introduce the titular God of Thunder to Earth by the end of this movie, thus leading into the all important, all-consuming Avengers franchise.

Whether Thor’s mortal vessel Donald Blake will be involved is still undisclosed, but it would make sense, as Blake would give the character a more grounded connection to Stark, Rogers et al. Until he swaps his doctor’s coat for Mjolnir and a shiny winged helmet, that is.