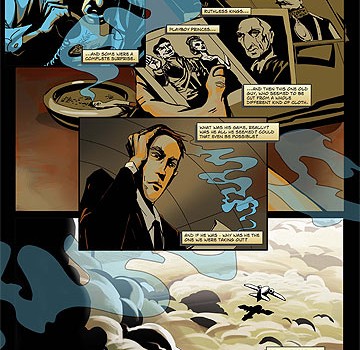 While digitally distributed comics are nothing new, it arguably took the unveiling of the iPad to not only get the medium some much needed mainstream attention, but to give us geeks something to read said digital comics with on the go. All, while flaunting that super slick, super shiny screen, naturally.

Emerging publisher Cognito Comics has debuted its first graphic novel Operation Ajax, billed as an “original story based on history.” The GN is a fact-based account of the CIA’s involvement in the Middle East and the roots of the modern American conflict with Iran, inspired by best-selling investigative journalism Stephen Kinzer’s All the Shah’s Men: An American Coup and the Roots of Middle East Terror. This nonfiction narrative has been developed for the iPad from the ground up by game developer Tall Chair.

Operation Ajax will be released later this fall, and those wanting to be notified when the book becomes available, can get tweeted at: www.twitter.com/cognitocomics. For those who haven’t been able to scrape together enough pennies from behind the sofa to afford Apple’s latest must have accessory, Cognito Comics has a pretty wicked flash simulator available. Original story based on history:
Operation Ajax is inspired by the investigative journalism of best-selling author, Stephen Kinzer and his work All the Shah’s Men: An American Coup and the Roots of Middle East Terror. Kinzer has partnered with Cognito Comics as its advisor and is actively involved in editing the historic CIA thriller.

Operation Ajax tells the true story of the CIA’s involvement in the Middle East and the roots of the modern American conflict with Iran.

“There is an obvious gap emerging in the world of digital comics between the static and the interactive panel,” said Cognito Comics founder and CEO, Daniel Burwen. “We looked at new ways to bridge that gap by engaging people in narrative nonfiction with intricate art and layers of information. We let the audience choose what they want to access, at their own pace, without interrupting the flow of a story. And, that is fundamental to an immersive graphic novel experience.”

“Technology makes it possible to re-imagine how much detail we can include in a graphic novel,” said Dan Brazelton, CEO, Tall Chair, Inc. “The Tall Chair Active Reader for the iPad opens up new and extremely creative ways for authors, artists and publishers to tell a well rounded story. They can create books that hold layers of interesting articles, photographs or writings which expand the story they are delivering.”

The Active Reader makes it possible for an infinite layer of research-rich facts, interesting journalism and photos to be embedded within a historical narrative. Factual information and original documents discovered while the audience follows the plot can be easily accessed and effortlessly viewed without having to leave the pages of the book.

“We are able to throw away the limitations of a static page and guide people to secret passageways they can go to throughout the historical thriller,” added Tall Chair’s Dan Brazelton.

For example, in a recent blog post from comic book maven Scott McCloud titled About “About ‘About Digital Comics,'” he notes: “Long form comics are different from strips. If a cartoonist wants their readers to stick with a 60-page story about their Moroccan grandmother’s struggle with Diabetes, they need that reader to lose themselves in the story. That means keeping readers’ eyes on the page. Every time a reader looks away to navigate, they’re leaving the world of the story, and returning to the world of scrollbars and links.”

Operation Ajax:
Based on Stephen Kinzer’s investigative research, the narrative nonfiction in Operation Ajax examines the facts behind today’s political conflicts in the Middle East. A nameless protagonist — an amalgamation of government agents whose names were redacted from declassified CIA records — is the central character. He recalls the dramatic historical events he was involved in with heads of state, covert agents, and underground political activists. This is the first of what will be a series that follows the Protagonist as he looks back upon a lifetime of experiences of working in South America, Africa, Great Britain and the Middle East, and the memories that haunt him in his retirement.