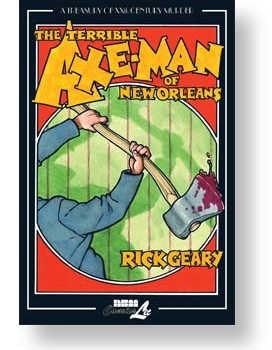 This June NBM will be releasing the latest in their ghoulish A Treasury of XXth Century Murder series, The Terrible Axe-Man of New Orleans. Part of the Junior Library Guild selection, this graphic novel by Rick Geary explores the infamous Louisiana serial killer’s reign of terror. The Terrible Axe-Man of New Orleans

Nights of terror! A city awash in blood! New Orleans right after the First World War. The party returns to the Big Easy but someone looks to spoil it. Grocers are being murdered in the dead of night by someone grabbing their axe and hacking them right in their own cushy beds! The pattern for each murder is the same: a piece of the door is removed for entry, the axe is borrowed on the property, and the assailant aims straight for the head! Why? How could he fit through that piece in the door? The man is never found for sure but speculations abound which Geary presents with his usual gusto!

A whole bunch of Geary’s pages can be enjoyed at www.nbmpub.com/mystery/axepre1.html