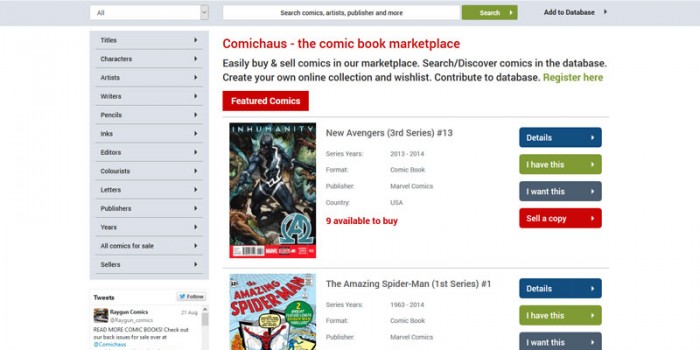 Looking to get rid of your comics? Then take a gander at Comichaus.com, a recently launched comic book marketplace that allows fans and collectors to sell their books as well as catalogue their own collections and set up checklists. Comichaus will also allow indie comic book creators to sell their work directly to their readers.

An endeavour such as this is always going to struggle against more established rivals, but the site’s efficient design and dedicated focus may just provide an indispensible outlet for those looking to sell their precious collections. There’s an 8% commission on any sales, so depending on what and to whom you’re selling that’s pretty damn competitive.

Even if you’re not in the mood to flog your funny books, the site has an impressive catalogue of titles and series, and while there are currently a fair few gaps in the database a number of UK-based comic retailers have already signed up, so expect that to change over the next few months.

Developer (and indie record label) Genepool is also hoping to expand their online directory by awarding a monthly prize to the site’s top contributors.