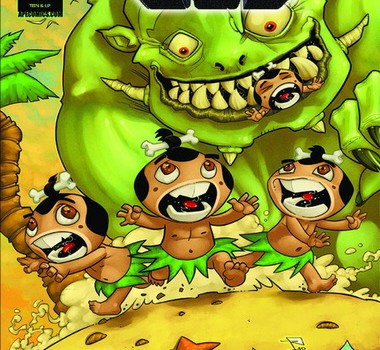 (San Diego, CA – August 10, 2010) Ape Entertainment announced today that their iPhone comic book app for the Pocket God property is currently ranked in the top twenty five of all apps in the paid comic book category. The app exploded after release on August 3rd 2010 and is still gaining popularity. iVerse Media, the digital distributor for Ape Entertainment, has seen record sales within the first week of releasing the Pocket God app, which currently contains one comic book issue and has out grossed all paid comic book apps, including apps that often contain hundreds of comic book titles. Fan support will likely transfer to the print version as many look forward to finally having a hard copy of the story they fell in love with when first playing the game.  The print version of the comic will be available in stores this September and will include additional content not found in the app. The second issue will be released digitally the end of September and in print before the end of the year and there will be free additional downloadable content between releases.

“I just can’t say enough good things about Michael Murphey and his team at iVerse Media. They have been fantastic to work with,” remarked Ape Entertainment CEO David Hedgecock.  Head of iVerse Media, Michael Murphey, gushed “I credit everyone involved for its success.   We have seen extreme support from everyone involved at all levels from creative to technological.  This is the fastest rising paid comic book app launch we have ever seen. It has already surpassed twenty five thousand downloads in its first week of release and is still going strong.” About Bolt Creative: Bolt Creative is a San Francisco-based developer creating original iPhone applications and games, including 2009’s blockbuster iPhone game Pocket God. Bolt Creative’s goal is to create games that are not only fun to play, but fun to develop and make them laugh. For more information, please visit www.boltcreative.com.

About iVerse Media LLC: iVerse Media, LLC is a digital distributor of comic books for mobile platforms. Established in 2008, iVerse has quickly emerged as an innovator and leader in the mobile publishing field.  Partnering with  high profile brands like Archie Comics, and leading industry publishers like IDW Publishing (”Star Trek”), Ape Entertainment (”Super Human Resources”), and many more have made it possible for iVerse to surpass 2.5 million downloads since its’ inception.

About Ape Entertainment: Founded in 2003, Ape Entertainment is the brainchild of lifelong comic book devotees David Hedgecock, and Brent E Erwin.  Home to such popular titles as GO-GO GORILLA AND THE JUNGLE CREW, SUPERHUMAN RESOURCES, BLACK COAT, ATHENA VOLTAIRE, and THE TROUBLE WITH KATIE ROGERS, it is also the North American publisher for DreamWorks Animation  licensed properties SHREK, THE PENGUINS OF MADAGASCAR, and Kung Fu Panda.