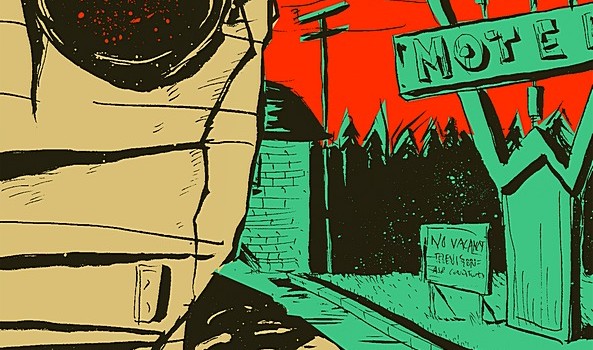 With Canadian artist/writer Jeff Lemire’s Sweet Tooth currently receiving widespread acclaim, his previous efforts Essex County Trilogy and The Nobody are justly receiving a great deal of backdated attention. But it’s easy to appreciate why The Nobody slipped under the radar last year; this contemporary take on H.G Well’s The Invisible Man is imbued with Lemire’s distinct storytelling approach and an atmosphere thick with xenophobia and paranoia, but doesn’t quite come together as well as you might have hoped for.

A tale of fear and loathing in small town America, The Nobody is narrated by teenage outcast Vickie, who recounts the arrival of bandaged stranger John Griffen to the peculiarly named Large Mouth. The reclusive but mannered Griffen instantly becomes the talk of the town, and the obsession of Vickie, who yearns to see under the dressing. But as another mysterious guest arrives in Big Mouth, and Griffen’s grip on his sanity loosens, the town and its residents are, in the words of Vickie, “changed forever.”

It’s a shame, then, that the air of menace that Vickie’s initial narration hints at doesn’t quite live up to its potential, and Griffin’s time in Large Mouth climaxes in a tragedy so predictable that it’s rendered as hollow as the body between the bandages. Any story in which a freak enters a town of distrustful, gun-wielding yokels only really has one outcome, really. The Nobody - Jeff Lemire

Lemire’s overall story might not be entirely satisfying, but his storytelling talents are indisputable. The black, white and blue illustrations depict a world of intensely white expanses and deep, consuming shadows. The Nobody’s characters are crudely drawn yet utterly distinctive, and the work of an artist more concerned with telling a human drama through his art than producing pretty but vacuous imagery. One particular 8-panel sequence, in which Griffen slowly binds an invisible hand in against a black background fascinates and engrosses me more with each revisiting.

The Nobody may lack the emotional participation of Sweet Tooth or the assurance of Essex County Trilogy but it’s an interesting oddity that is definitely worth a read, if more for the appreciation of Lemire’s visuals than his oddly hollow story.