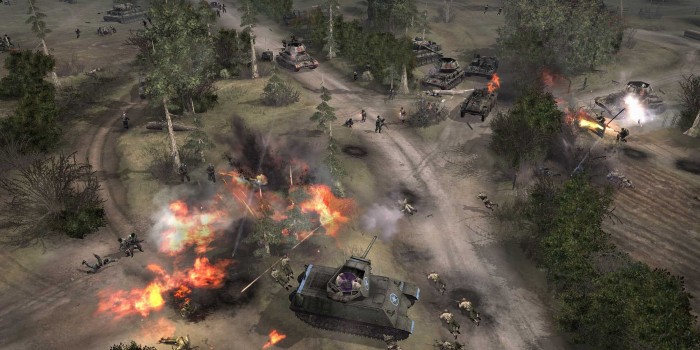 When it debuted in late 2006, Relic’s Company of Heroes seemed to be a first in many aspects. Not only was it the emissary for ‘Games for Windows’ and the first commercial game to utilise the new Direct3D 10, it was perhaps the first real-time strategy in which those little toy soldiers on the battlefield appeared to think and act for themselves. Following Relic’s success with the Warhammer 40,000 franchise, Company of Heroes managed to follow the World War II shooter vogue then led by the Call of Duty and its plentiful offspring without feeling like it owed its design to any of those series. While its foundations were steeped in RTS convention, COH had an intimate, infantry-driven approach that was as immersive as any first-person shooter. War had never been so much fun.

The first expansion, Opposing Fronts saw gamers hop into the steel-toed boots of those historical villains we all love to hate – or at least that’s how the videogame industry plays it – the German Panzer Elite, as well as those stiff-lipped gentlemen of the British Army. With no new factions to play, and only three brief campaigns, several new vehicle units and a trio of multiplayer modes on offer, Tales of Valor has far less to offer than Opposing Fronts. As a standalone expansion it upholds the series’ standard of excellence, but its skimpy features don’t really justify the full retail price.

Like Opposing Fronts, Tales of Valor is a standalone expansion, and does not require the original game to run. Those unaccustomed to the series will probably want to study the clunky but adequate training mode, though in all fairness anyone who hasn’t played the original Company of Heroes is best advised to start there instead. Be warned, Valor’s unforgiving single player campaigns are designed for players familiar with Company of Heroes, or at least the RTS genre if not this particular series, and the tutorials only cover the game’s most basic aspects.

For those new to the franchise, your objective in Company of Heroes is largely based around occupying a series of regions on the map, and gaining control of their resources, which come in three fabulous flavours: Manpower, Munitions and Fuel. Manpower is automatically generated at a rate affected by the number of Strategic Points you control, while you must capture Munitions Points and Fuel Sectors to upgrade your weapons, bestow your troops with special abilities and gain access to new buildings and vehicles. Deliberate progression into enemy territory is recommended, as to bring Munitions Sectors into constant supply, you must connect them to your HQ by capturing the sectors between them.

Experience points earned from vanquishing enemies and fulfilling objectives unlock command points, which in turn enable you to grant special abilities to your squads, developing your company’s defensive/offensive capabilities or giving you access to devastating Company Commander abilities such as artillery strikes. It’s this RPG element that makes Company of Heroes such so darn immersive, as you gradually augment your army to suit your playing style, but there’s nothing to prevent a more experienced player from storing their Command Points and perpetually adapting to suit their situation. Utilising cover is also essential to success, and units can convert residential buildings into garrisons, field barracks or medic stations while, naturally, you’ll also be developing soldiers that specialise in destroying such shelters. Traditional RTS resource management conventions are kept to a minimum in Company of Heroes, with micromanagement details such as the reinforcement of troops and vehicle modification being your primary concern. The result is a spontaneous experience that is easy to pick up but has oodles of depth. Spur-of-the moment decisions soon prove as critical as broader tactics, yet a gung-ho approach will generally result in your soldiers being swiftly massacred. Conversely, unlike many other real-time strategy games, Company of Heroes’never grants you a ludicrous number of troops with whom to effortlessly swamp your opponents.

Rather than the classic storyline of Company of Heroes, which was clearly influenced by the likes of Band of Brothers and Saving Private Ryan, Tales of Valor provides three smaller campaigns for your enjoyment, in which you control the American Able Company, the German Panzer Elite and the German Wehrmacht, who compensate for their questionable ethics with a snazzy wardrobe. No crusade for Blighty this time around. Each campaign takes place in only one location, though, with every mission upping the ante as the trio of commanders face increasingly difficult odds. The back-stories are functional if not particularly inspired, though they are driven by some magnificent illustrated cutscenes. Rather neatly, if you own either the original game or Opposing Forces the superior campaigns from these games are also available from the same title menu.

One of the highlights of the original COH was pitting your troops against a seemingly indestructible steel behemoth. Flipping the concept on its head, the ‘Tiger Tanks’ campaign demonstrates, if nothing else, how quickly wreaking havoc in a near-indestructible tankcan get. ‘Causeway’ takes a similar approach to ‘Tiger Tanks’ but sees the return of Able Company, the squad from the original Battle of Normandy campaign, who have once again found themselves out-numbered and out-gunned. While every other company that assists Able kicks the bucket within minutes, you’ll have the opportunity to equip your veterans with such a large number of abilities and bonuses that each member is soon the WWII equivalent of Commando’s John Matrix. ‘Falaise Pocket,’ a defence orientated series of missions in which your Wehrmacht squad fend off an allied invasion on a rural village, is also great fun while it lasts. While these brief campaigns (only nine missions in all) offer a good variety of gameplay and tactical approaches, nothing they throw at you tops the original Battle of Normandy campaign, and Valor’s single player experience is likely to run out of mileage in a weekend. But competitive play is where Company of Heroes is at, and the three new multiplayer modes joining Victory Point Control and Annihilation attempt to mix things up a little in the way that first-person shooters have been doing for some time. Each new mode corresponds to one of the single player campaigns, so consider those the entry exam into online humiliation.

The excellent Operation Stonewall has your under-equipped squad defending a small town from successive waves of enemies; while the first few minutes of Stonewall are a breeze, the attacks increase in regularity and ferocity, and the overall effect is not unlike the Horde Mode from Gears of War 2. Operation Assault has you control a single super-soldier across a hectic battlefield, much like the commando levels from Command & Conquer. And then there’s the crazy Operation Panzerkrieg, which is essentially an all-tank deathmatch, and presumably the reason for the addition of the new direct fire gameplay enhancement. The aforementioned ‘direct fire,’ which allows you to control the aiming of shots from certain units (predominantly tanks) pretty much epitomises everything that is problematic Tales of Valor. Like every other element in this expansion it’s a feature that neither revolutionaries nor ruins the game. In fact, you just as easily sit back, pretend that the feature does not exist, and let the capable AI continue to do its job.

Disappointingly, Relic have only supplied us with one map per mode. Though they all present a good few hours of carnage, Operation Stonewall in particular, none of these variations have the lasting power of the traditional Annihilation Mode. Relic’s online service is as ever excellent, and all four factions are now available to play online, whether you own the original game or Opposing Front expansion – reason enough to buy the game, really.

There are sadly no new factions, but each existing side receives two new vehicles. Rather than just tossing you the keys to a spiffy new set of wheels, Tales of Valor demands that you replace an existing unit with it. In all honesty, none of these new war machines add substantially to what is already a finely-tuned multiplayer experienced, but if new units are what you’ve come to expect in an expansion, then you’ve got them.

As with its predecessors, Tales of Valor ran slickly on my PC, and configuration was effortless thanks to the handy System Performance wizard. Though the dynamic Havok engine is several years old it still holds up to any recent release, and even on lower or laptop settings the game’s inviting animations and sense of drama aren’t lost. Buildings fall apart, pastoral fortifications crumble under the treads of an M4 Sherman, pinned troops instinctively crawl for cover and the sort of explosive barrels that only exist in Hollywood movies and videogames ignite in such an awesome manner that, bar a proper sequel, it’s unlikely that any other WWII real-time strategy will surpass Company of Heroes’ presentation this year.

Overall, Tales of Valor is an odd package. The uniquely focussed competitive modes aside, it doesn’t add enough to entice all but the most invested players back for more, and yet it does little to ease fresh players into its involved online shenanigans. While the single player campaigns are underwhelming, Company of Heroes’ balanced multiplayer still stands above the competition, and as an expansion pack it more than does its job, providing just a little more of the intuitive real-time strategy that has become Relic’s trademark.