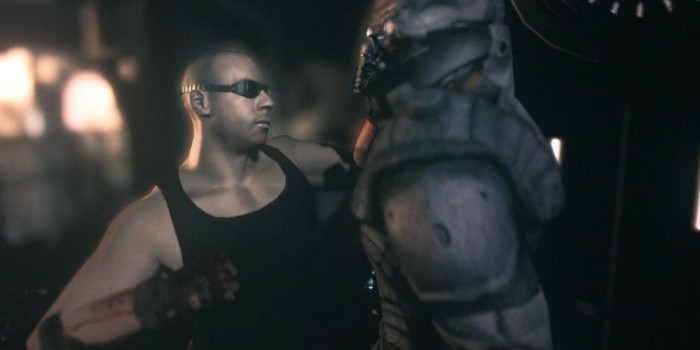 No other fictional archetype is more suited to videogame adaptation than the classic Hollywood action hero. It’s one of those painful ironies that by the time the videogame sound and visuals were capable of delivering a movie quality narrative, the great 80s muscle-heads were looking a little… old. While Bruce Willis put his likeness to the PS1 shooter Apocalypse and Chow Yun Fat recently “starred” in the John Woo produced Stranglehold, perhaps the only game to truly put you in the robust physique of a big, ballistic heavyweight star has been The Chronicles of Riddick: Escape from Butcher Bay.

When Escape from Butcher Bay hit the original Xbox in 2004 it broke the rule of film to videogame adaptations and spin-offs, in that it was actually exceptionally good, receiving far better reviews than the universally panned movie sequel with which it coincided. Unfortunately, as with many first-rate sixth generation games that weren’t released on the PS2, it missed out on a large share of the gaming audience. Swedish developer Starbreeze Studios have more than rectified this missed opportunity, by including a remastered remake of Butcher Bay with its follow-on sequel Assault on Dark Athena.

Despite Assault on Dark Athena being the more recent of the two games, it’s likely that you’ll want to start on its acclaimed predecessor. Essentially a prequel, Escape from Butcher Bay leads directly into the events of Pitch Black (or at least it did) detailing the origin behind Riddick’s eye modification, his escape from the eponymous maximum-security prison and eventual (re)capture by the bounty hunter Johns.

While Butcher Bay was one of the best looking Xbox releases, it has been touched up considerably, with improved lighting, high-res textures and marginally shorter loading times being the most noticeable enhancements. For the majority, the visual presentation holds up to Star breeze’s previous shooter The Darkness, but this makeover is occasionally betrayed by the noticeably stilted animation and some unsophisticated enemy AI. Vin Diesel’s likeness was, and still is, spot-on, though that’s not surprising since he was reportedly involved in the game’s production. You can’t help but love tough guy dialogue that’s so brazenly macho that it could have come from mouth of Rainier Wolfcastle’s McBain.

Playing Escape from Butcher Bay almost five years after its release, what’s most surprising is how many of its key mechanics, such as the lack of a HUD, the hand to hand combat, brutal disarm sequences, and the seamless integration of stealth and shooting sections, have become commonplace. While this hardly diminishes the enjoyment to be had from the game, those who missed out on Riddick’s jailbreak the first time round may wonder what the fuss was all about. But what makes Butcher Bay such an unforgettable experience is how it remains adamantly grounded in its own reality. Bar some cave dwelling mutants, there are no villains or surroundings that feel out of sync with the universe depicted in both Riddick movies, and the workings of the penal colony itself are given an attention to detail that most Hollywood sci-fi movies can only dream of. From the dream sequence tutorial to the nanoMED health units, there are enough design flourishes to please sci-fi fans throughout. Even the slower moments, which take on an adventure game dynamic as Riddick befriends certain convicts while orchestrating his next escape, are enjoyable due to some great voice work from the likes of Ron Perlman, Dwight Schultz and Xzibit. Bonus material, such as concept art, can be collected by finding cigarette packets, some of which must be acquired from other convicts through exchanges of cash or favours. Rather than requiring Riddick to share the top bunk with a burly inmate, these favours generally involve bones being broken for the prison’s top dogs.

I seem to have made it halfway through this review without even mentioning the main attraction of this FPS duo, but there’s a good reason for that. Whereas the first instalment ingeniously manipulated FPS conventions to suit its plot, Assault on Dark Athena is slightly more conventional shooter. It’s by no means a bad game but it suffers simply from being paired up with the superior Escape from Butcher Bay. Lodged uncomfortably between Butcher Bay and Pitch Black, it resumes with the capture of John’s ship by the Dark Athena, a space pirate slave ship that trawls in any smaller ship ill-fated enough to get in its way, and is patrolled by remote-controlled drones.

Dark Athena was originally planned as an expansion, and it shows; the game fails to do anything that Butcher Bay had not already done better. There are still some brilliant touches, however. Riddick is unarmed throughout the earlier stages, and can only gain access to firearms by exploiting the arm-mounted guns of felled drones. It’s an inventive approach, as dragging these drones proves too awkward, and forces you to utilise the shadows, and in group scenarios scheme who you take out first. Efficiently disposing of unaware enemies with the sadistic Ulaks, a pair of hooked blades, never gets boring. Dark Athena looks splendid, with slicker animation and detail than Butcher Bay, but some clipping issues still remain. The music is excellent, creating a grim ambience throughout both game’s steel interiors, and the voice work is of the highest calibre, including sci-fi regulars such as Michelle Forbes and Lance Henriksen. Diesel’s rumbling delivery never sounds like a phone-in, as is often the case with big stars in licensed games. It’s also a little longer, though much of this is due to the frequent backtracking Riddick is forced to do, often in search of such uninspired items as a screwdriver or data pad.

One minor problem I have with both games is that the earlier stages are more stealth dependent than later levels, with a more deliberate approach essential to Riddick’s survival. Butcher Bay’s guns are DNA-encoded, so Riddick has to use his brains as well as his brawn to obtain even a rudimentary blade (“if you want to live, get a shiv”) but once he gets his hands on a decoded weapon the action instantly loses its appeal, with the relatively easy shooting sections becoming increasingly tedious. Dark Athena suffers from this even more so, with the need for deliciously vicious stealth attacks petering out around a third of the way into the game in favour of unimaginative gunplay.

Bounty cards dotted about the Dark Athena provide serve a similar purpose to the cigarette packets, but there isn’t anything substantial to add reply value to the package. Yet while both games prove are individually brief experiences (around 8-12 hours each) Escape from Butcher Bay is so impeccably paced that you’ll want to replay it for the same appreciation that one revisits a good movie, and Dark Athena is enjoyable enough to warrant a rerun in a year’s time.

Butcher Bay was originally criticised for an absence of a multiplayer mode, and Starbreeze have put this right with a selection of the usual Deathmatch, Team Deathmatch and Capture the Flag offerings. The most remarkable of these is ‘Pitch Black,’ in which one player assumes the role of Riddick, and must use his eyeshine ability to traverse the shadows of a dimly lit arena while other players hunt for him with torchlights. Dark Athena’s multiplayer is unlikely to drag you away from Gears of War 2 or Halo 3 for long, but it’s a well crafted supplement to the feature presentations.

Fans of Riddick, Diesel or futuristic FPSs who might have overlooked Escape from Butcher Bay on its original release are definitely advised to give it a go. The game has aged well and its unique setting and Hollywood sensitivities still make it stand out today. The less formidable Dark Athena is a good sequel that disappointingly loses momentum about halfway through.

But embrace Assault on Dark Athena as the remaster of an underrated, underplayed gem combined with a worthy expansion/sequel and a new multiplayer mode, and you really can’t go wrong. It’s a bargain combination that few will be disappointed with.