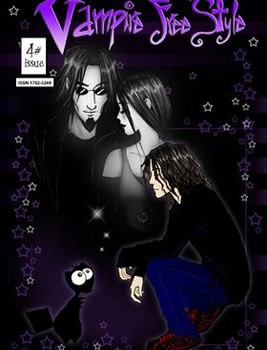 Vampires, vampires everywhere, and not a drop to drink. The monster so popular they’ve practically had an entire genre erected around them… and so on. Though calling the modern Nosferatu a “monster” is something of an overgeneralization, given the number of thoroughly decent bloodsuckers that have descended from Bram Stoker’s tragic immortal. Vampire Free Style has one such amiable vamp, though there’s a fair bit more to this series than the usual boy-with-fangs meets girl premise. Vampire Free Style primarily follows witch boy in training Padroncino, his search for his missing girlfriend and Micia, the stray cat he befriends. Micia is clearly more than your common street feline, and dreams of a presumably previous life as a human. A third plot strand, which begins with the introduction of the aforementioned vampire Edward, and flashbacks to his life 300 years prior, slowly joins the dots as to the fate of Padroncino’s beloved and the identity of his implausibly cute pussycat.

What impressed me most about Jenika Ioffreda’s story is how much appears to have happened in just three issues; though Issue 4 (of 6) has numerous revelations, it still clings dearly to its secrets. As with any long running narrative, dipping into Vampire Free Style midway is a rather daunting experience; hopefully the series will be compiled once it’s completed. A recap is included on the inside front cover, but there’s so much to take in that trying to digest it all is likely to give you a headache.

Ioffreda’s monochromic art is absolutely charming, blending the Eastern sensitivities of Studio Gibli animes such as Kiki’s Delivery Service and Spirited Away with the inherent Englishness of vampire fiction and old Hammer Horrors. I was going to comment that it’s not difficult to imagine the eyeballed silhouette of black cat Micia making its way to T-shirts sometime soon, but those are already available from the site. She’s an endearing creation that has swiftly become the series’ mascot.

Tonally the antithesis of its title, Vampire Free Style is a very sweet book. But it also presents an interesting enough mystery to appeal to more than romantic Goth girlies – not that I’m belittling that particular demographic in any way whatsoever. It’s a thoroughly enjoyable read, recommendable to all ages and genders.

If any of this piques your curiosity, previews of the series can be found at www.neptunefactory.com, as well as a list of the numerous London-based comic stores that stock the issues. Amongst a range of wallpapers, avatars, animations, apparel, there’s also a free download of Jenika Ioffreda’s previous comic Checkmate Infinite Technology.