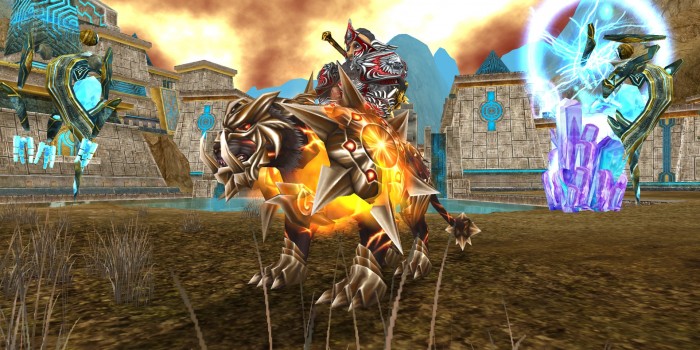 The old “you get what you pay for” axiom is thoroughly disputed in this immensely enjoyable free-to-play MMORPG.

Runes of Magic is testimony to the virtues of an open mind. Just 10 minutes into Frogster’s import of Taiwanese developer Runewaker Entertainment’s MMORPG, I had already dismissed it as a World of Warcraft rip off. Look at a few screenshots and you’ll understand why. Yet after just 2 hours into the game these apprehensions had been pushed aside. 4 hours after that my eyes were bloodshot and my rear had developed chair sores; such is the allure that this derivative but enjoyable game has, and in spades. Yes, Runes is a clone, but it’s far from a cheap Asian knock-off.

Let’s get this out of the way: Runes of Magic looks like World of Warcraft. A lot like it. Squint and you might believe it was Blizzard’s industry dominator. It also plays like World of Warcraft, with an interface system that will be instantly familiar to over 10 million gamers worldwide. But then WoW itself was not particularly original; instead Blizzard took the best elements from previous efforts and crammed them all into a streamlined, extremely accessible package. In several small ways Runes of Magic improves on that approach, and though its presentation is occasionally shoddy it’s a hell of a lot of fun. Further still, it’s “free.” There’s a reason for those inverted commas above. Runes of Magic is a free-to-play RMT-based game – that is, it is entirely without charge to download and play online, but those wishing to surpass the competition may purchase additional augmentative items and vanity possessions, from the game’s Item Shop. Real money is traded online for in-game diamonds, which in turn can buy bonuses such as double experience points for a certain period or protective spells, and special armour and weapons. The equipment, however, can also be earned through quests and bought with virtual gold, maintaining a level of impartiality during PvP bouts.

But, if you’d rather do things the hard (and cheaper) way and you’re willing to invest considerable time into it, items can be customised by the Arcane Transmutor, a device which allows you to mix and match attributes from various weapons and armours, and is charged by earning Phirius Tokens from the plentiful daily quests. And that dilemma is essentially Runes of Magic in a nutshell: anyone who wants to progress though to the higher levels will be expected to spend either a) money, or b) time. Whether the ability to buy one’s development in an MMORPG is detrimental to the spirit of competitive play is open to debate, but as it’s the sole method via which a RMT-based game such as this can expect to generate revenue, it’s a realistic compromise. As enjoyable as my moment in Taborea has been, I can’t help but feel that as your character’s level rises (currently it caps at 50) the need to reach for the credit card in order to progress will become more difficult to resist. Anyone planning on playing Runes for more than a few weeks will probably need to at purchase additional storage space and a permanent mount. Everything else may prove helpful but probably not indispensable. The vainer gamer can also waste his/her hard earned cash in the Styling Shop, if the colour of your avatar’s hair is truly worth real-world money.

For a game that hopes to entice players into buying its virtual wares, it’s not surprising that Runes of Magic gives you a charitable amount of items early in the game, with a seemingly endless supply of gifts and experience aids being presented to you at every level-up. Perhaps what will strike anyone adept at other MMORPGs most is how accommodating the game’s navigation system is. You’re rarely lost during a quest, but in the unlikely event that you do run out of things to do, a few clicks through the intuitive menus will effortlessly direct you towards the nearest mission-bearing NPC. Though the quests are rarely more inventive than the usual “find my lost son” and “slaughter me 10 pigs” chores, there’s so many to do at any one time, that just by aimlessly traversing the world of Taborea butchering every poor beast that crosses your path, you’re bound to complete a fair few. Perhaps the principal reminder of Rune’s lower budget is the limitation of races and character classes; though with two new classes and a second race apparently in the pipeline this is set to improve. All players must adopt a human avatar, and begin their journey at the Pioneers’ Colony in the relatively hospitable Howling Mountains. There are currently only six character classes available, none of which venture outside of the most common archetypes: Warrior, Knight, Scout, Mage, Priest and the combo-savvy Rogue. Players can adopt a secondary class, and switch these dual classes by simply returning to their apartment; a feature that always granted extended interest to Square’s Final Fantasy XI. Runes does get one up on WoW during the character creation process, allowing you to, ahem, inflate your female adventurer’s bosom to gigantic proportions.

That aforementioned ability to swap character whenever you please really emphasises what Runes of Magic is about. Dying infers little penalty other than a hike back from the nearest respawn spot, and much like Guild Wars, completing quests is a far more efficient way of levelling up than grinding; with bulletin boards offering numerous daily quests there’s always something to do. You can also study every crafting ability without enduring penalties for others; though more so than any other element of Runes, unless you have boundless hours to squander this will require some real-world cash.

Runes of Magic’s scope may be tiny in comparison to WoW, but it’s this freedom that makes it just as much fun. Such is the leisurely pace at which you’ll initially stroll through Taborea that the game is definitely recommended to those who’ve found the grinding and gathering of other MMORPGS a little, well… grinding. Because the first 20 levels are so easy to accomplish solo, early areas are relatively quiet on the social front, and though the existence of instances small (6 players) and large (36 players) as well as guilds does encourage you to get together with other players, I get the feeling that the purchasable items will encourage standoffish gamers to reach for their wallets rather than communicate with other humans. There is a PvP (player versus player) mode for those who would rather kill their fellow man than cooperate with him, and the PvE (player versus enemy) mode does feature a duel request. But unless you’re equipped to the optimum be prepared to die, repeatedly. Thought the game’s art style is reminiscent of, surprise-surprise, World of Warcraft, it has a softly lit, Eastern aesthetic, with the monsters, demons and inhabitants you’ll encounter flaunting some interesting designs. Special mention must go to the kinkily clad maid who cleans and services your apartment 24/7. The locations, though typical fantasy environs such as Medieval villages, haunted forests and crystal caves, are also well rendered and varied enough that you always want to travel just that little bit further. The music is suitably epic, though it tends to cut out at regular intervals, leaving you to listen to uninspired animal grunts and blade slashing sound effects.

Unlike numerous message board contributors, I found installation to be a smooth process, with none of the update issues others are reporting. While Runes of Magic is as pretty a free game as there’s ever been, it does suffer from frequently jerky animation. It’s almost heart-rending to leap upon your splendid new mount only to watch it judder across the landscape with all the grace of the wooden horse of Troy. The game occasionally reveals its Taiwanese heritage with some sloppy translation work, and there’s little in the way of tutorials or guidance beyond a few vague help boxes; Frogster are clearly confident that anyone playing Runes will have some experience with the game from which it shamelessly ransacks.

Only time will tell if Runes of Magic will be remembered as a free alternative to WoW or another also-ran. Much of the promised new content has yet to materialise, and the game is definitely rough around the edges, but it’s difficult to imagine anyone who hasn’t subscribed to another MMORPG being able to resist Taborea’s vivacious beasts, glamorous locations and 1000-plus quests.

If you’re curious about the MMORPG genre but have been discouraged by the commitment of a monthly subscription, the rudimentary browser-based visuals of past free-to-play online games, or perhaps lack access to a credit card, Runes of Magic may be just the game for you. Rest assured that you’ll be getting no substandard experience; as imitative as the game is, there’s clearly been a lot of effort put into it.